After the completion of the 7th round of Ikaros International Chess Tournament 2013, upsets and surprises keep coming up, with FM Stathes Gazis (seeded No. 5) of S.M.S. Elefsinas keeping the lead having an absolute (7/7) score, and the 19 years old Dimitris Kanellos of S.O.Pagratiou (seeded No. 22) tying for the 2nd place. 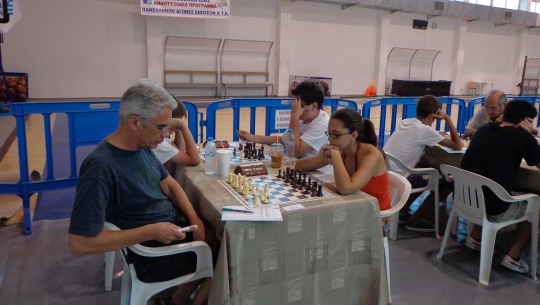 After the very dense schedule of the first days of the tournament, the participants at last had plenty of free time on the afternoon of the 17th of July, the day of the celebrations for the liberation of Ikaria from Ottoman occupation and had a very good time at the local “panigiri” (festivities).

On the previous day some members of the local cultural club “Ioannis Melas” had taught the chess players the local dances and especially the widely famous “Ikariotikos” (the traditional dance of Ikaria). Members of “Ioannis Melas” also offered to the chessplayers a guided tour at the Cultural Museum of Aghios Kirykos.

On top of these activities, the organizes of “Ikaros 2013” with the help of the local cultural clubs staged at the playing venue an exhibition of photos and documents that aims to introduce the tournament participants to Ikaria, its beauties, history, culture and its unique traits.

The same material has been presented before during the Exhibitions of the Greek Popular Culture in 2008, 2009 and 2010 at the stand of the Ikarian Culture Clubs of Athens and were twice awarded with distinctions. The text accompanying this material was written by Marina Moula while the photos belong to Christos Malahias.

The last round of the 36th International Chess Tournament “Ikaros” 2013 – Aegean Open Championship will take place on Saturday morning.

The closing ceremony and the prize giving as well as the honorary awards to the past and present mayors of Aghios Kirykos and Ikaria will take place at 7.p.m.

After the closing ceremony the 4th Mediterranean Rapid Team Tournament will take place.

On Sunday and Monday there will be friendly matches between the teams of Ikaria and Samos as well as some events in the memory of the first Ikarian candidate master Manolis Stavrinadis.

This year the promotion of the tournament has surpassed all previous records, with TV and radio spots on nationwide stations, articles in major newspapers (double-page article in the Friday, July 19, issue of the “Ethnos”), and extensive references at Ikarian and chess websites in Greece and worldwide!

More info about the 36th International Chess Tournament “Ikaros” 2013 can be found at: http://www.ikaroschess.gr