In just its third edition, the Indonesia Open has already established itself as the premier international chess event in South East Asia and arguably the leading or at least one of the top tournaments in Asia.

Last year the organisers took great pride that a second event actually took place and were now looking forward to ensuring its continuity annually and this year with a record breaking prize fund of USD 100,000, there is no doubt at all this event will be growing from strength to strength.

Indonesia chess has always been great experiences in warm and generous hospitality and so it was no surprise that the first two editions attracted top class fields and two worthy champions in Surya Sekhar Ganguly (2011) and Yu Yangyi (2012), who we all know has become World Junior Champion! 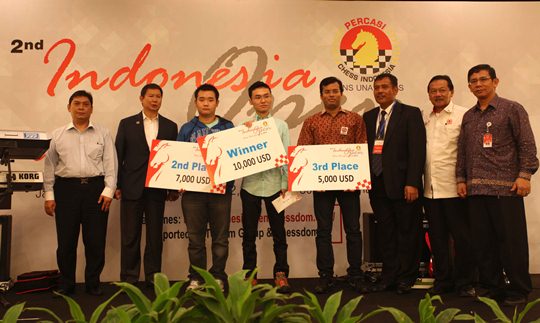 India is well represented and led by Ganguly (2630) and Sandipan Chanda (2609) while other regional powerhouses in Vietnam and Philippines have respectively a challenger in Nguyen Ngoc Truong Son 2625 and all their top players other than Wesley So.

China is surprisingly absent this time with all their players contracted to the ongoing China chess league, but there are promises of sending a couple of talented juniors.