Peter Svidler bounced back after yesterday’s loss by winning against Veselin Topalov in round 5 of FIDE World Candidates Tournament. At the same time Viswanathan Anand preserved the lead after splitting the point with Dmitry Andreikin.

Kramnik and Aronian played a wild match that eventually settled in a draw after six hours of play. The first game to finish today was a peaceful draw between Sergey Karjakin and Shakhriyar Mamedyarov.

After five rounds Anand remains on top with 3,5 points. Kramnik, Aronian and Svidler share the second place with 3 points each. A full point behind are Topalov, Mamedyarov and Karjakin. Andreikin remains last with 1,5 points. 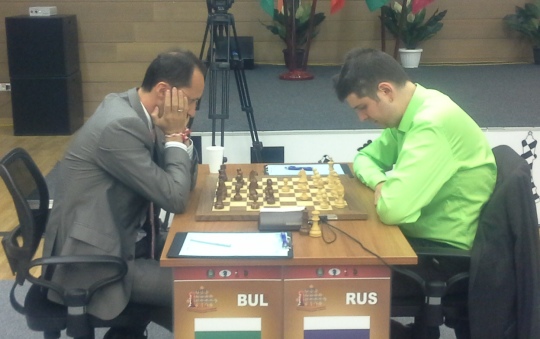 Shakhriyar Mamedyarov attempted to play the Naidorf Sicilian, which is not very common in his practice, but Sergey Karjakin circumvented with the Bb5 check and the Moscow variation.

White’s 12.Nd5 allowed massive exchanges at black’s convenience who was just on time to strike the pawn chain with 15…b5.

Black could even allow the luxury of giving up a pawn to activate his heavy pieces. Draw was signed on move 31.

At the press conference both players agreed that Mamedyarov’s 21…a5 was very strong, practically securing a draw.

Despite the unpleasant experience with Berlin Ruy Lopez in the World Championship Match in Chennai, Viswanathan Anand himself adopted the opening with black in the game against Dmitry Andreikin.

Andreikin employed the system with early Bxc6 and Be3, championed by his compatriot Ian Nepomniachtchi. But Anand was already familiar with the plan, having earlier defended black against Topalov.

The main battle was on the queenside where white was attempting to break to the 7th rank. Anand, however, played quickly and confidently, while Andreikin was burning his clock.

Black constantly had a small pull, but white held the position together and the draw was signed on move 43.

Veselin Topalov revived a line in the Ruy Lopez Møller Defence that was previously considered dubious. His 10…exf3 appears to better than the committal 10…Bxf2+.

The surprised Peter Svidler spent lots of time to accurately navigate the resulting sharp position. After move 14 he actually thought that he is losing. But he treated it well and even emerged with slight advantage.

A couple of imprecise moves by black, namely 26…Ka6 and 28…Ne5 were enough to get him in trouble. The combined force of rook and two bishops harassed the stranded black king until white was able to trade down to the winning endgame with the passed h-pawn.

The start of the game between Vladimir Kramnik and Levon Aronian was quiet as it can get, but it didn’t take long before white started piling his pieces towards the black king.

Kramnik already has the experience of blasting the opponents off the board after a seemingly modest setup (for example against Van Wely). Aronian responded with counterplay in the center.

White forced the opening of the long diagonal, which looked immensely dangerous for black. Luckily for him, Aronian had a strong trump in the advanced e-pawn.

With the help of the temporary queen sacrifice black succeeded in simplifying the position down to an equal rook endgame.

Kramnik pressed on but to no avail as Aronian played precisely to hold a draw.