The second games of the final matches of the World Chess Cup were played on Saturday September 17th in Khanty-Mansiysk. The battle between the Russian Grandmasters Peter Svidler and Alexander Grischuk turned out not to be very long – already on the 16th move the opponents agreed for a draw.

Grischuk who was behind in score was also expected to strive for a full-blooded fight playing Black, that is why to the White’s 1.e4 he chose a sharp Najdorf system in the Sicilian Defense. However, we must note that this system is sharpened only if White also strives for a sanguine fight. As for Svidler, taking into account the situation in the match, he decided to play in a calmer way.

Svidler: As I said yesterday, most of my White games are drawn. I decided not to deviate from the recipe of success that is working very well. Seriously speaking, it was not exactly what I wanted when I played 6.a4, but rather soon we got a whittled position. 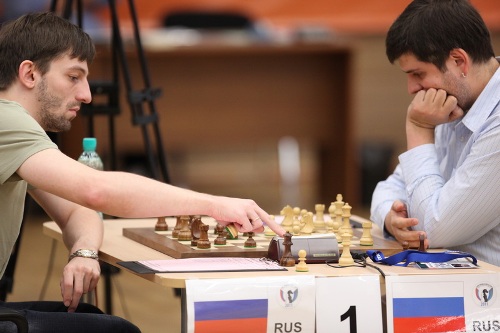 Grischuk: Today Peter proved once again that he is a man of his word. Like Alexander Kerzhakov who used to say: «I kicked, I kick and I will keep kicking!», Peter is saying: «With White I drew, I draw and I will draw!». I have calculated something: White has 10 main lines on the 6th move and the move 6.a4 is among the most solid and boring ones.

The match for the 3rd place and for the last ticket to the World Championship cycle between the Ukrainian Grandmasters Vassily Ivanchuk and Ruslan Ponomariov was more eventful.

Ponomariov with White did not interpret the Vienna Variation very successfully and after the opening got a dubious position. Very soon queens disappeared from the board and the Black’s advantage became more obvious in the endgame. 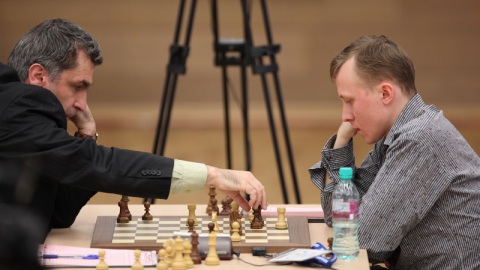 White had to speed up in order to develop the King’s side while Black gained the initiative all over the board: he advanced the pawns on the Queen’s side and penetrated with the rook into the opponent’s camp.

White was defending very persistently: having sacrificed a pawn, he activated all the pieces and then the fight has flashed with renewed energy. However, in the time-trouble Ponomariov blundered the blow on g2 after which the White’s position became hopeless.

To conclude, after two playing days Svidler is ahead of Grischuk with the score 1,5-0,5, and Ivanchuk is leading with the same score in the match against Ponomariov. 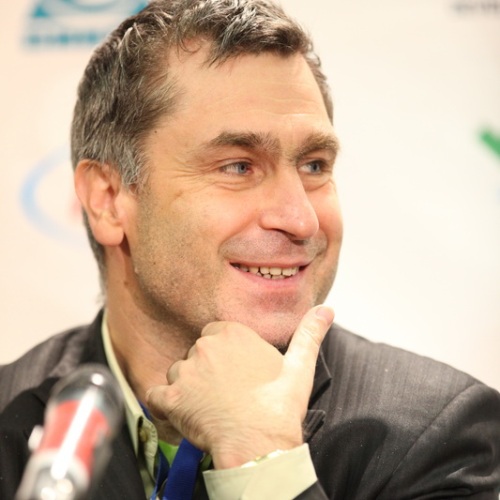 Vassily Ivanchuk pleased with the victory

The 3rd games of the World Cup matches for the 1st and 3rd places will be played on Sunday, September 18. According to the regulations, the opponents are to play four classical games at this stage. If they finish with the score 2-2, then the fight will be continued in tie-breaks.