Today Radjabov made a fairly quick comeback, beating his opponent in about three hours. Ivanchuk has a reputation of an incredibly knowledgeable player, so Radjabov wisely decided to avoid theoretical discussions, and selected a modest setup, aiming for a lengthy maneuvering battle. However, already on the 10th move White exploded the position, sacrificing a piece for two pawns. It is hard to say if the sacrifice was objectively correct, but it worked excellently in the game. 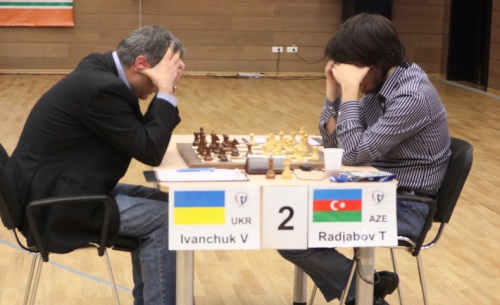 Vassily Ivanchuk and Teimour Radjabov focused on the game

Such turn of events was a very unpleasant surprise for Ivanchuk. The Ukrainian started to make mistakes. First he made a wrong bishop trade, giving up the dark squares, and then made a poor choice on the 16th move, selecting the worst recapture on c6. Soon Radjabov obtained material advantage and successfully converted it. The players will continue fighting on tie-breaks.

Peter Svidler was the first to advance to the Semi-Finals, defeating Judit Polgar with Black pieces. In the Scheveningen Sicilian Black quickly won a pawn, but White’s compensation was sufficient, as she had a strong bishop and good pieces arrangement. According to Svidler, draw would be a logical conclusion to this game, however, Polgar overestimated her chances and was caught into one of the traps created by her tricky opponent. Black’s passed pawn gained a lot of strength and decided the outcome of the battle. 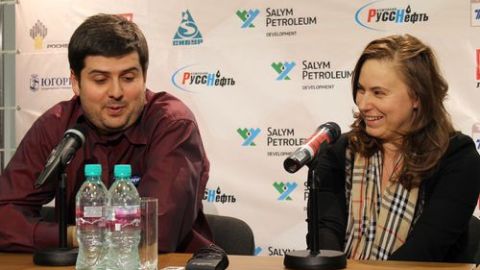 Peter Svidler and Judit Polgar at the post-game conference

David Navara (Czech Republic) was also very close to his goal. He obtained a small advantage after the opening, increased the pressure and eventually won a pawn. However, he made a single careless move, and Alexander Grischuk (Russia), known for his amazing defensive skills, found a saving resource and, instead of losing two pawns, equalized the material balance. The game ended in a draw. 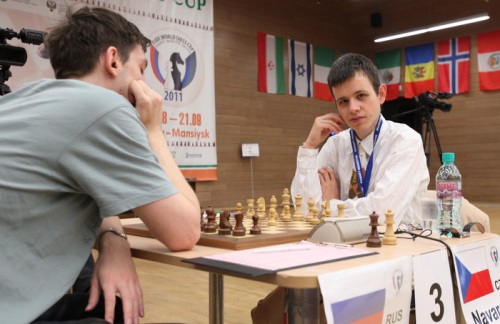 The former World Champion Ruslan Ponomariov (Ukraine) selected the Berlin Variation of the Ruy Lopez against his opponent, Vugar Gashimov (Azerbaijan). It was a typical game for the Berlin: White maintained the pressure, Black patiently defended and traded pieces. Vugar Gashimov probably made a mistake by trading his second knight for a bishop, after which Black seized the initiative.

The game was very nervous, both players made mistakes, but Gashimov made the last error and eventually succumbed. Ruslan Ponomariov advanced to the Semi-Finals, where he meets Peter Svidler. 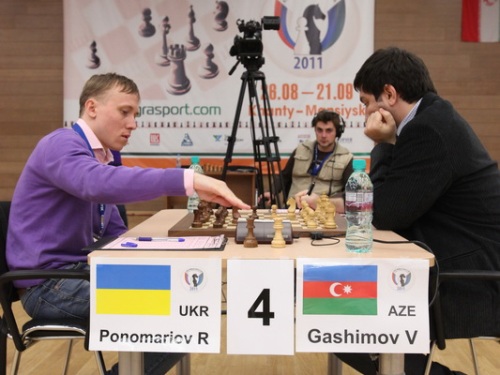 The tie-breaks will be played on Sunday, September 11th. The last two Semi-Final spots will go to the winners of Ivanchuk-Radjabov and Grischuk-Navara matches.