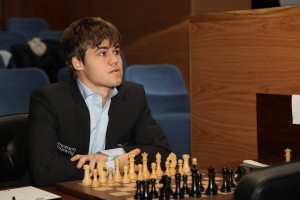 Tal Memorial 2013 will be held on 12th – 24th June in Moscow, Russia. The Russian Chess Federation announced the super strong lineup of this prestigious event.

The Tal Memorial will be among the various elite events that will gather the strongest players in the world, after the Alekhine Memorial and the Norway Chess tournament.

This will be the second tournament in a row, after the one in Norway, where World Champion Viswanathan Anand will play against his challenger Magnus Carlsen. They will be joined by ex-world champion Vladimir Kramnik, who was very close to the victory at the Candidates Tournament.  The big absence will be Armenian Levon Aronian, however, he will play in both the Alekhine Memorial and Norway Chess.

It is also noteworthy the presence of the challenger of the last World Championship match, Boris Gelfand, who will be looking for chances to demonstrate that he is still in shape to battle at the highest level.

Expect full coverage of this event with live games and daily reports on Chessdom.