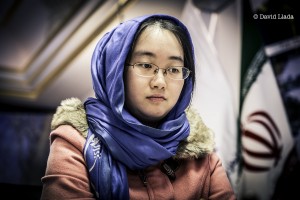 The way to the final for Tan Zhongyi was not an easy one. One could compare her to a cat with nine lives, as she was close to being eliminated on several occasions. In total she played 29 games , but no opponent proved better than her in a direct match. Tan Zhongyi started against Sabrina Foisor. A draw in game 1 and a victory with black in game 2 was enough for the Chinese player to advance to the next round. There she was on the brink of disaster after she lost game one against the ex Women World Chess Champion Anna Usenina. A solid game and amazing precision in game 2 pushed the match into tiebreak. Yet again Ushenina won her game with white and Tan Zhongyi had to save the match. She not only equalized again, but won both tiebreak 3 and tiebreak 4 games to advance in the next round. There she met Padmini Rout – the future World Champion missed a clear win in game 1 and quickly agreed to a draw in game 2, probably confident that in a tiebreak she has more chances than with a game with the black pieces. However, yet again Tan Zhongyi had to save the day after her Indian opponent started with a victory in game 1. Tan Zhongyi won game 2 to equalize, game 3 to take the lead, and drew game 4 to close the exciting encounter. In round 4 Tan Zhongyi had to face an established authority in chess and compatriot – Ju Wenjun. While the odds were on the side of experience, Tan Zhongyi surprised in game 2 by winning a brilliant game with black.

The semifinal was a show of its own. Harika Dronavalli lost the first game against Tan Zhongyi, but managed to survive and win a dramatic 162 moves encounter in game 2. It was the opposite story in the first pair of tiebreak games. The first one went to Harika Dronavalli. Right when everyone thought the Indian had secured a draw in game 2, she blundered after the time control and Tan Zhongyi was alive again. The second pair of games was another exchange of decisive blows, followed by two draws. The Armageddon proved to be a real show – Harika had the chance to win it twice with the computer showing 5.0+ , but the Tan Zhongyi managed to escape and qualify for the final.

In the final match the Tan Zhongyi defeated Anna Muzychuk after 2-2 in the classical games and 1,5-0,5 in the tiebreak. The final match was a dramatic encounter of turnarounds, emotions, strong chess and a thrilling tiebreak. All started with a quiet draw – game 1 of the match was decided after about 20 moves and after some shuffling the point was split. The storm started in game 2 where Tan Zhongyi surprised Anna Muzychuk in the opening. The Ukrainian got a very unfavorable position and despite fierce defense could not salvage the point. Losing a game in a short match usually means disaster, but Muzychuk’s reply was immediate. She stayed calm in game 3 and used the series of blunders by Tan Zhongyi to equalize the match and force it in a tiebreak with a game 4 draw. The first game of the tiebreak Muzychuk with white was slightly better, but could not find a way to a full point. However, game 2 was a different story – Muzychuk blundered 39. Kh6 and in one move Tan Zhongyi became World Women Chess Champion.

With the victory Tan Zhongyi also becomes a Grandmaster, a title awarded to anyone who has won an official FIDE World Chess Championship

Stay tuned for a full report on Chessdom.com