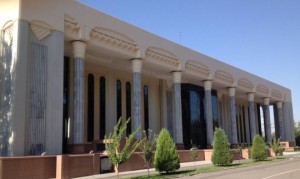 The second stage of the FIDE Grand Prix series 2014-2015 will take place from 20th October until 2nd November in Tashkent, Uzbekistan.

The tournament follows the first event which recently concluded in the capital of Azerbaijan. Fabiano Caruano (ITA) and Boris Gelfand (ISR) tied for the first place in Baku Grand Prix and are the leaders in the third GP series.

On 15th October FIDE announced the change of the third leg of the Grand Prix series to Tbilisi, Georgia. According to regulations the representative for the new host city is GM Baadur Jobava who replaces GM Ghaem Maghami with his complete playing schedule.

Over eleven rounds, the strongest players in the world will compete in the round robin tournament with the time control of 120 minutes for the first 40 moves, with 60 minutes being added at that point and then each player will be allotted 15 minutes after the second time control and an increment of 30 seconds per move will be allowed from move 61 onwards.

A very special cup will be prepared for the strongest player in the Grand Prix series 2014-2015. During the opening ceremony in Baku the Classic Jewelry House Lobortas demonstrated the models of future Big and Small trophies to award the FIDE Grand Prix series winner.

The opening ceremony and the games will take place at the Gallery of Fine Art on the 20th of October. Two previous Grand Prix tournaments were organized here as well.

The Tashkent Grand Prix will be followed shortly with the Tigran Petrosian Memorial and the World Championship Match Carlsen – Anand.

In contrast to the two previous Grand Prix cycles the number of tournaments was decreased from six to four to be held over two years (2014-2015). Each of 16 players of Grand Prix series will play in three tournaments out of four and all his results will be taken into account for the overall final standings of the Grand Prix. The list of all 16 Grand Prix participants is here. It includes 11 qualifiers as per regulations, with four more nominees from the organisers and one from the FIDE President.

The winner and second placed player overall of the Grand Prix Series will qualify for the Candidates Tournament to be held in the last quarter of 2015 or the first half of 2016.

Article by Anastasya Karlovich, courtesy of the official website