The press conference dedicated to the organization of the International RSSU Chess Cup Moscow Open 2016 was held in the multimedia centre of TASS news agency on Tuesday, January 26.

Vladimir Palikhata said that for Moscow Chess Federation it is the most important event in the event calendar. ‘We see the interest of chess players not only from Russia but all over the world. This year around 1700 chess players from 38 countries will participate in the competitions. Despite difficult economic situation, the festival prize fund will be preserved at the same level and will remain attractive for the participants’. 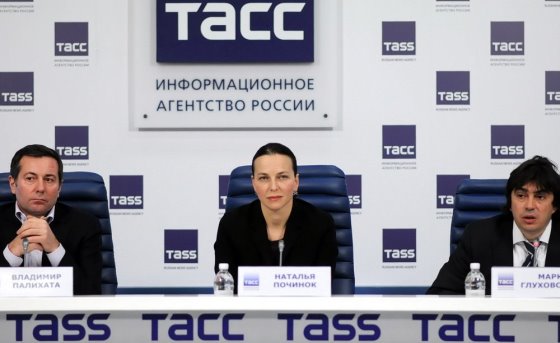 Responding to the question on development of “Chess at schools” programme in Moscow, Vladimir Mironovich said that about 50 capital schools have chosen chess as the third physical education lesson”. ‘This project is being actively developed in the capital with support of International Chess Federation, Moscow Department of Education and Russian State Social University. All the research shows that chess helps children become better, be more competitive. And this is one of the main focus areas’ Palikhata emphasized.

Natalia Pochinok noted that chess players from the leading national universities and also delegations from foreign countries will come to the student competitions of the festival. ‘The 12th RSSU Cup is an important and remarkable event for us. This time we have tried to improve the level in terms of tournament organization quality, involvement of a larger number of students and from the infrastructure point of view. We took into account the best world practice in tournament organization. The central tournament point of attraction will be our main conference hall that will be equally convenient for grandmasters and amateurs’, she informed.

Natalia Borisovna said that the RSSU intends to nominate “The largest chess lesson” that will be held on January 29 in the RSSU as a part of Moscow Open programme to the World Guinness Records.

From her perspective, chess has big development prospects in the university system of the country. Active chess activity is conducted in many leading Russian universities. Natalia Borisovna also noted that the RSSU is now running continuing professional development courses for teachers willing to teach chess at schools. The immediate plans include implementation of chess activities in all 750 schools of Moscow.

‘Traditionally the festival includes around 500 chess players from Moscow, the rest of the sportsmen arrive from Russian regions and from abroad’, Albert Chiliev told the journalists. He wished best of luck to all the participants of the competition.

Mark Glukhovsky noted that the RSSU Cup Moscow Open is the largest Russian tournament that is a big merit of its organizers. ‘The assets of chess players from the Russian National Team include victories in Moscow Open. It would be great if other Russian regions could organize not just tournaments but specifically festivals since the festivals gather a large number of participants and become important events in the cultural, social and sport life of a city’, said Glukhovsky.

Alexander Kostyev, the tournament director and the president of Moscow International School Chess Union noted that the festival format provides participation opportunities for all chess player categories: professionals, school children, veterans, chess amateurs. In addition, the tournament will include the representatives of practically all continents excluding Australia. Alexander Nickolaevich drew attention to the fact that the programme of the RSSU Cup Moscow Open will include the first student tournament held under the auspices of the Russian Student League that was established last summer with Natalia Pochinok as its president.

Kostyev gave some details of ‘The largest chess lesson’ that will be held on January 29 in the RSSU Chess House and will be nominated for the World Guinness Records. According to him, 250 young chess players will participate in this lesson.

Oleg Zhuravsky noted that his company is honored for the second year in a row to be a general partner of the RSSU Chess Cup Moscow Open – one of the main tournaments in the world. Oleg Anatolyevich said that his company supports two young promising and already famous chess players – Ilya Makoveev and Elizaveta Solozhenkina. This year, despite their young age, both of them will participate in the main adult tournaments of the festival – Russian Cup stages among men and women, respectively. In addition, Oleg Anatolyevich said that one of his sons – Georgy Zhuravsky, will take place in the RSSU Cup among school children.

Traditionally the drawing of lots for all festival tournaments took place during the press conference. It was carried out by Natalia Pochinok and Mark Glukhovsky. Natalia Borisovna pulled out a white queen. This symbolized that the rating favorites and all chess players with odd starting numbers will play white in their games of the first round.