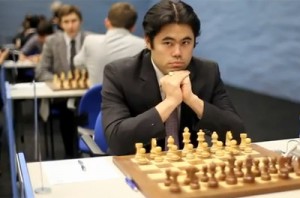 View photo gallery round 1: click here for the photos

Live commentary of round 2 of Tata Steel 2012 starts at 13:30 CET, all other games will be with computer analysis on the Chessdom / Chessbomb live games platform.

Great start of the 2012 Tata Steel Chess tournament in Wijk aan Zee for me with a victory today against Vugar Gashimov, Azerbaijan (ranked 10th in the world). I haven’t won the 1st round here since 2008. One week in the sun in Egypt before this event was a pleasant way of preparing for this long tournament, and today I felt in really good shape. I probably played reasonable well although it was a bit difficult to keep 100% focus on my own game with so many and interesting games taking place in the A and B group on the same stage. After the hedgehog opening I played a standard plan promoted by Ulf Andersson and others in the 70s with rook doubling in the d-file followed by b3, Qb1, a4, Qa2 etc. White has a small but comfortable edge and I managed to keep putting pressure on black. To create some activity he finally played b5 and after the more or less forced sequence he played d5 as expected. Admittedly I was a bit surprised by the strength of the this move. White is still better but black might hold. His activation of his rook might not have been the optimum plan and after his g5 I could close the kingside with g4 and white must be winning. I tried to play practical chess by continuing to restrict his pieces and not give him any activity. Finally with three pawns against one and opposite colored bishops he cannot stop both my distant passed pawns and resigned. Tata Steel is taking place for the 74th time (!) and the unprecedented category 21 round robin 14-player event stages 7 out of the world top 10. Aronian seemed to be in good shape as well and both he and Giri, who just won the Reggio Emilia tournament with a great finish, won with black against Karjakin and Gelfand respectively today for a three-way lead. Tomorrow I’m facing Ivanchuk with black followed by white against Aronian on Monday! watch the live game with commentary here

Gelfand – Giri game of the day in Tata R1

The 500-euro “Piet Zwart Prize” for the best game of the day was awarded to Anish Giri for his victory over World Championship contender Boris Gelfand of Israel. The Dutch prodigy, fresh off his formidable tournament victory at Reggio Emilia in Italy a week ago, made a big impression with another fine example of his mature positional style. Giri aptly neutralized Gelfand’s initiative after the latter sacrificed a pawn out of a Queen’s Gambit Accepted. Commentator of the day, Grandmaster Ivan Sokolov (one of the authors of Chess Evolution), was especially impressed with the 17-year-old’s ability to keep posing his opponent new problems every time a safe haven came in view.

All pairings of round 2 here

All results Tata Steel A round 1

All results Tata Steel B round 1

All results Tata Steel C round 1