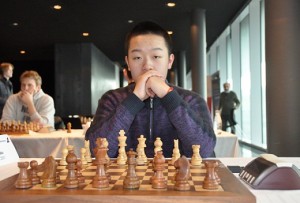 Tata Steel 2016 is one of the strongest tournaments in January 2016. The Masters bracket of the tournament features 14 of the most renowned chess players today. Each day before the tournament, Chessdom will bring you a pretournament summary for one of the 14 participating Grandmasters.

Chessdom.com is bringing you daily previews of the participants of Tata Steel 2016. Yesterday we started with Magnus Carlsen, today we continue with a young talent, who is considered by many a future challenger for the World Championship title. Wei Yi has achieved quite a lot at his young age and is the most promising young player this year. This young GM has surpassed expectations time and time again.

He started off by becoming one of the youngest players ever to achieve his GM norm at the Reykjavik Open tournament. At the time, he became the current (as of 2013) youngest GM in the world and the 4th youngest to achieve the title in history, only behind Sergey Karjakin, Parimarjan Negi and world’s Nr.1 Magnus Carlsen. He followed that through with a string of successes that made him the youngest chess player ever to break through the mythical 2700 rating barrier at just 15 years old.

In 2015, his successes continued with becoming the Chinese Champion. He competed in other notable tournaments such as the strong strong Magistral de Leon 2015, retaining his title from last year. He also became the biggest contributor in China’s win in the 2015 World Team Championship

In the Tata Steel tournament last year, he was placed in group B, which he won in a convincing manner, completing the event with 10,5/13 points, staying half a point ahead of the Czech champion David Navara. This year, the Chinese prodigy has been rightfully placed in the Masters group. Will he be able to prove his mettle in the Master’s division as well? Stay tuned with the Tata Steel 2016 live coverage to see the action daily from January 16th.