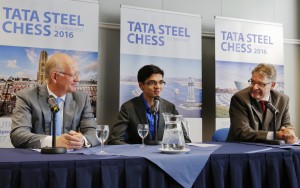 Tata Steel Challengers will once again be a very strong parallel event to the main section. It features Jorden van Foreest, at 16 years old, who is currently the youngest Dutch Grandmaster and will debut at the Tata Steel Chess Tournament in January 2016. However, Van Foreest is not the youngest ever chess player to participate in Wijk aan Zee, as the 15-year-old Samuel Sevian, who at the age of 14 managed to secure 5th place in the Tata Steel Challengers in January 2015 holds this honor.

Jeroen van den Berg, director of the Tata Steel Chess Tournament: “I am very pleased with the field of partipants of the Tata Steel Challengers. It is a good mix of nationalities and of young and more experienced players. Samuel Sevian from the USA is one of the youngest chess talents, whose rating has almost reached the magical 2600 barrier. Among other opponents, he will face Russian Mikhail Antipov, who is only three years older and already reigning world youth champion. I am also very interested in seeing how the youngest Dutch grandmaster, Jorden van Foreest, will perform at his first tournament in Wijk aan Zee.”

Dutch women champion Anne Haast will participate for the second time. Apart from successfully defending her national title, she has also managed to lay claim to the national rapid chess title this year. There are two other female participants who will make their debut in Wijk aan Zee. The very strong Chinese grandmaster Ju Wenjun has been part of the women’s Top 10 for quite a few years. Nino Batsiashvili (Georgia) is the other female grandmaster participating.