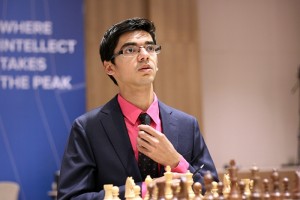 Tata Steel 2016 is one of the strongest tournaments in all 2016. The Masters bracket of the tournament features 14 of the most renowned chess players today. Each day before the tournament, Chessdom brings you a pre-tournament summary for one of the 14 participating Grandmasters:

So far we have seen the profiles of Magnus Carlsen and Wei Yi, it is time for the local hero. Anish Giri has participated in quite a few events last year. Most recently, he brought the London Chess Classics to a three-way tie, together with Vachier-Lagrave and Carlsen, two of his opponents in Tata Steel 2016. In addition to that, he remained unbeaten throughout the whole competition showing a ever growing understanding of the game.

Earlier in 2015, Giri had a solid performance in the 8th Bilbao Masters, where he tied for first, this time with another Tata Steel Masters participant, Wesley So. Good showing at the World Cup Qualification coupled with his previous performances have given him a solid end of year rating boost, bringing him to the closest spot to the magical 2800 barrier at 2798 points and third behind only Carlsen and Kramnik.

Is it time for Giri to take a major chess tournament title? What better place to do it than at home in Wijk Aan Zee, Netherlands. In the previous two Tata Steel tournaments Anish Giri has placed second, so that would be the most logical of steps for the young talent.