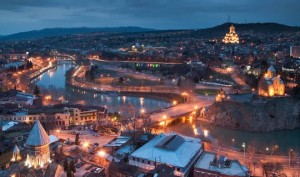 The third stage of the FIDE Grand Prix series 2014-2015 will take place from 14-28th February in Tbilisi, Georgia.

FIDE Grand Prix is part of the FIDE World Chess Championship cycle. The winner and second placed player overall of the GP Series will qualify for the next Candidates Tournament.

The first two events were held in Baku, with Fabiano Caruana and Boris Gelfand sharing the first place, and in Tashkent where Dmitry Andreikin emerged sole winner.

Leading the overall Grand Prix standings after two events is Caruana on 230 points, followed by Hikaru Nakamura on 207 points and Andreikin on 190 points.

Each Grand Prix stage is a 12-player round robin event with the prize money of 120,000 EUR offered by the host city. The winner of Grand Prix in Tbilisi will earn 20,000 EUR.