The event will start with a brand new website, that will show the games in real time, together will all information about pairings, standings, and statistics.

Find all participants, tournament system, and regulations posted below. More information you can find in the “help” menu of the official website.

The competition starts with Stage 1, which consists of 3 groups (1a, 1b and 1c), where each group is a single round robin meaning that all the participants play each other once. 66 games will be played in total for each group (198 for all groups) where the top five from each group and the best 6th placed will qualify for Stage 2 (16 in total). Do not miss the start, on February 7th at 20:00 CET, join the live games 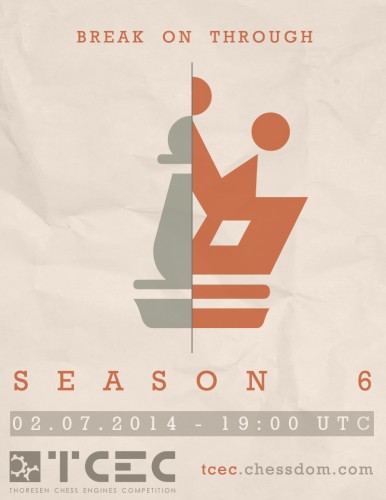 TCEC (Thoresen Chess Engines Competition) is a computer chess tournament organized and maintained by Martin Thoresen, in cooperation with Chessdom Arena. The goal is to provide the viewers with a live broadcast of long time control, quality chess – played strictly between computer chess engines created by different programmers. One Season is divided into several Stages and lasts about 3-4 months. The winner of the Season will be the TCEC Grand Champion.

As soon as a Stage starts, it will run 24/7 until all games have been played. One game is played at a time – the next one starts automatically. There will be a short break between the Stages, to make sure everything is ok with the TCEC game server and to prepare for the next Stage.

A Season starts off with Stage 1 which consists of roughly 36 engines. This can vary from Season to Season, as can the format (Swiss / round robin etc). Then the top X (varies) will move on to Stage 2, while the rest is out of TCEC for the current Season.

Stage 2 consists of the engines that qualified from Stage 1. It is usually a single round robin. The top X move on to Stage 3 while the rest is out of TCEC for the current Season.

Stage 3 consists of the engines that qualified from Stage 2. The format for Stage 3 is usually a double round robin so that each engine will play both sides of the same opening against each other. The top X will move on to Stage 4 while the rest is out of TCEC for the current Season.

Stage 4 consists of the engines that qualified from Stage 3. It is a multiple round robin and the openings are chosen randomly per pair so that each engine will play both sides of the same opening against each other. The top 2 will qualify to play the Superfinal, while the other engines are out of TCEC for the current Season.

After Stage 4 has finished, the top 2 engines will meet in a Superfinal of 64 (previously 48) games. This match is played with 32 different openings so that each engine plays both black and white of the same position. The match will be presented with opening 1 used in games 1 and 2, then opening 2 used in games 3 and 4 etc. If the match is theoretically won for one side before game 64, the match will still continue until all 64 games have been played. In the case of a drawn match there will be a Rapid match of 16 games with a time control of 25′ + 10″. In case it is still tied there will be a Blitz match of 8 games with a time control of 3″ + 2′. When the Superfinal is over, the current Season ends.

The time control of this season is 120 minutes + 30 seconds added per move for the whole game, in all events. If an engine loses on time, the game will not be replayed. If the TCEC game server locks up at any time during a game (BSOD, freeze etc), that game will be restarted unless the last position was a 6-man or less tablebase position, then it will be manually adjudicated.

TCEC uses openings put together by Nelson Hernandez and Adam Hair. All of them are 8 moves deep. If you click the Help menu and then “The Season 6 opening book” you can read in detail how they prepared for this challenge.

All new engines will receive an initial ELO rating based on the CCRL 40/40 single CPU list. If an engine isn’t found here, or if it has played very few games, the CEGT 40/20 single CPU list is used instead but the rating difference between Houdini 3 64-bit in the two rating lists will be added to the rating. If an engine isn’t found in either list, an approximate ELO rating will be given to that engine based on tests from the programmer. If an engine is updated to a new version, this new version will inherit the rating of the old version. When you enter “Archive mode” in the File menu, you can see the official TCEC ratings at the bottom right corner – they are updated after each Stage or Superfinal.

The engine programmers can provide updates only before an event starts, not during. However, there will be no extra testing meaning that this is a gamble if the engine could be unstable. The deadline for engine submission is the last game of the current Stage – the goal is to be able to start the next Stage as soon as possible without any significant delay.

In the case of a serious, play-limiting bug (like crashing or interface communication problems) not discovered during the pre-Season testing, the engine can be updated once per Stage to fix this/these bug/bugs only. If this update still doesn’t fix the problem(s) or if there is no update available, the engine might have the number of cores reduced, have the hash size reduced or have the tablebase access disabled – these changes will remain for the rest of the Stage.

If necessary, tiebreaks can be used to determine advancement. For all Stages, the first tiebreak criteria is the “crash” tiebreak, meaning that if an engine has crashed once or more during the Stage, it will fail qualification versus another engine that has not crashed if both of them has the same amount of points. The Sonneborn-Berger criteria is the second. If still a tie, the greatest number of black games decides. The next criterion is the greatest number of wins, then the greatest number of wins with black. In case of still being tied, then the direct encounter between the tied engines decides. If they are still tied, then the tournament director decides which engine gets the promotion.