The temporary logo of TCEC is actually a puzzle, scroll down for more information

The premier computer chess event TCEC Season 10 is starting this Saturday, 14th of October, at 14:00 CEST. Once the start is given, TCEC runs 24/7 until all games have been played. One game is played at a time – the next one starts automatically. Follow the games at the official site

The Top Chess Engine Championship (TCEC) Season 10 is the annual premier championship for chess software. It is a competition between 24 engines with ELO 3000+ and is divided into two stages and a Superfinal.

TCEC Season 10 is a record breaking event in several aspects:

ELO average record: The participants have the highest average ELO of any season so far. What’s more, the engines have provided custom versions for the event, adding a few extra ELO points to their total playing strength. See the list of participants further down in this article

44 core server: TCEC Season 10 will be played on a 44 cores server Xeon 2699 v4. This is a huge upgrade regarding previous seasons where a 16 cores or 20 cores machines were used and has become possible thanks to the support of the devoted audience of TCEC. While it will be challenging for some engines to utilize all cores, we will certainly see new levels of chess from the top participants, which is one of the main goals of TCEC. More about server specifications here

Special selection of openings: TCEC will have the finest selection of openings, guaranteeing combative chess and also eliminating the one more white game advantage in single round robins. The amazing openings are the work of the finest experts in the field – Nelson Hernandez and Jeroen Noomen. You can see Nelson Hernandez explaining the huge work behind the scenes in the video here

Join us for what projects to be the most exciting season of TCEC ever. Games start rolling at 14:00 CEST on Saturday and will be live on the official website. It is the same page that everyone loves from previous season, containing an inside look in the “brain of the engines” (depth, principal variation, speed, evaluation, tablebases use), complete statistics and standings, chat with the engine authors and computer chess experts, and much more.

Superfinal: two engines will participate in the Superfinal, playing a total of 100 games for the title of Grand Champion of TCEC

As tradition goes, Martin Thoresen has posted an interesting puzzle on the live page of TCEC. It is to celebrate Season 10 and the figures are distributed in a special way to form the number 10 on the board. The task for those of you who love puzzles, find a mate in exactly 10 moves! 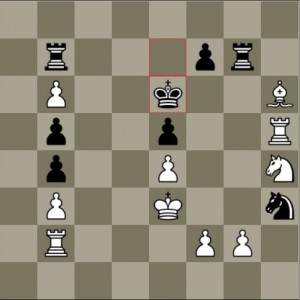