Season 10 of the premier computer chess championship TCEC is on track to break all records for viewership of an engine vs engine event. Stage 1, which continued for 24 days and was won by Komodo, has been viewed by about 229 000 users. This is a 83% increase compared to the previous season of the same event. The number is expected to double during Stage 2 (currently going on) and grow even further during the most interesting part of the TCEC championship – the Superfinal.

Looking at the bigger picture, 22% of the users come from North America, 22% come from Western Europe, 13% from Eastern Europe, and 11% from Northern Europe. Africa and Australia/Oceania are also represented, with about 1,5% of the total audience each. 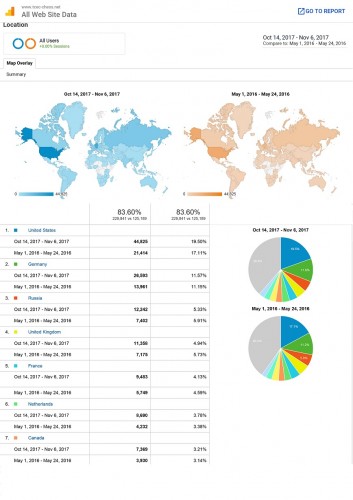 It is very difficult to make a precise estimate of an online audience. A “user”, “viewer”, “unique user”, “unique IP”, and any related term do not have a precise definition and only give estimate to the magnitude of an audience. It is difficult to detect if more people are behind one device (case often found in USA, Russia and India) or if one user is on several devices (very often seen in Norway, Sweden).

Currently, TCEC is relying on the statistics provided by Google analytics.

No matter the precise definition, the given magnitude of TCEC shows that there is a computer event that rivals in interest the top invitational human chess events. What’s more, the statistics are a precise measure that there is a trend of constant growth of the interest towards computer chess.