Season 15 of the Top Chess Engine Championship will begin this March 5th at 20:00 CET. It will feature a record number of engines to accommodate the booming sector and a record ELO of the participants. A total of 44 engines will face off in a division based system to determine the current status quo of strength and the grand champion of TCEC.

Stockfish has dominated the Top Chess Engine Championship for four consecutive seasons or a total of 10 months. It has a chance to expand this dominance in Season 15 for over 1 year (see the analysis of GM Matthew Sadler). Stockfish will have to show its best as significant challenge is coming from DeepMind’s Alpha Zero open source sister Leela Chess Zero. LCZero applied significant pressure in the S14 Superfinal, losing by a narrow margin 49,5-50,5. It also convincingly won its first major title the TCEC Cup and the inter season rapid bonus, thus showing high inspiration and determination for the title. These two engines, however, cannot relax, as Komodo with its innovative MCTS version and all other engines from the higher divisions will also bring in their best. Additionally, a new unique supervised learning neural network Allie+Stein will start from the bottom division and is aspiring to attack the top from its very first season.

The Top Chess Engine Championship has a dedicated website with games going on 24/7 at http://tcec.chessdom.com . You can enjoy the games with live commentary by BlueFish (Stockfish running on 172 cores, represented by a blue line on the graph), Redmodo (Komodo on 128 cores, represented by a red line on the graph) and chat with engine authors, computer chess experts, and friends in the ever lively TCEC chat.

The previous season was record breaking in audience, including in the video broadcast of the event. A total of 500 000+ viewer hours were registered in the past 30 days, which is #1 position on Twitch among the chess channel, and higher than 50% of the total chess audience viewership altogether. You can follow the alternative video broadcast at TCEC Twitch TV 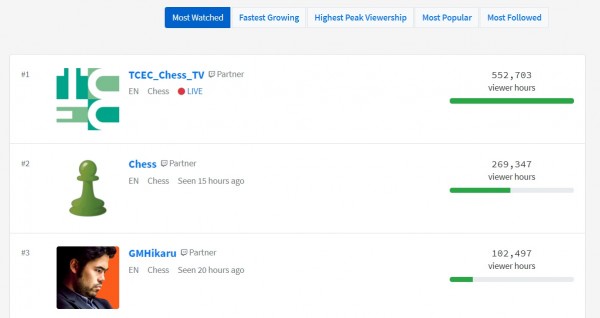 TCEC is the most watched chess channel and competition by far, according to the official Twitch Metrics

Growth of TCEC session viewers season by season from 2015 to 2019 visualized by Google analytics. S14 was a !boom (click on the image to expand)

Division 4 of the Top Chess Engine Championship will evolve this season 15. It will expand to accommodate all engines that are active and have ELO above 3000. It still remains testing ground for new engines and as support for the computer chess field, however, one cannot ignore that from this division have started engines like LCZero, Komodo MCTS, Ethereal, ChessBrainVB, etc.

Division 4 will be with two groups, !division4a and !division4b. Each will contain ten engines that will play a 1xDRR tournament with time control 30 min + 5 sec. The top two engines of the groups will promote to a playoff – !div4playoff. That will be a 2xDRR event which will determine the two engines advancing to Div 3.

Rules and regulation changes for Season 15

The rules set of TCEC advances one more step this season 15, to resolve specific cases that arose in previous seasons. Besides the expansion of Division 4, here is what will change in all divisions:

* Black wins will be removed from the tiebreak criteria, due to the usage of advanced books. The order of tiebreak criteria is as follows 1: # of crashes. 2: Direct encounter. 3: # of wins. 4: SB. 5: TD decision

* The top 4 engines of !div4a and the top 4 of !div4b, so 8 in total, qualify for the TCEC Cup. The engines in the playoff are seeded by their final standings, the other ones are placed on a random draw seeds 29-32

There will be no change of the 3 strike out rule this season, due to the multiple cases that have to be covered. An engine update during a division will count as a strike.

The engine uniqueness requirement stays intact , as worded in the S14 rules and regulations.