The Superfinal of the Top Chess Engine Championship TCEC is going to take place Nov 6 – Dec 1, 2015. Komodo and Stockfish will clash for the highest computer chess title in what is going to be the strongest chess match in history. Both engines boast ELO of over 3200 and each will come with its best and strongest modification for the event.

Komodo, the reigning TCEC champion, had a smooth way to the final. It won Stage 1a, then easily cruised through Stage 2, and now has won Stage 3 as well.

Stockfish was merciless in Stage 1b starting with 11,0/11, performed well in Stage 2, and would have been very close to Komodo in Stage 3 had it not encountered a minor bug that made it lose 1,5 points before the organizing committee intervened

As a result, the two strongest chess engines are now at the Superfinal and after one hundred Komodo vs Stockfish games the new computer chess champion will be crowned.

The final match consists of 100 classical chess games with the following rules. This match is played with 50 different openings so that each engine plays both black and white of the same position. The match will be presented with opening 1 used in games 1 and 2, then opening 2 used in games 3 and 4 etc. If the match is theoretically won for one side before game 100, the match will still continue until all 100 games have been played. In the case of a drawn match there will be a rapid match of 16 games with a time control of 25′ + 10″ with random openings selected from earlier in the same Season. In case it is still tied there will be a Blitz match of 8 games with a time control of 3′ + 2″. When the Superfinal is over, the current Season ends.

Games of the Komodo – Stockfish Superfinal will be live daily on the official site of the championship tcec.chessdom.com with the PV analysis graphs of the engines, time usage comparison, tablebase statistics, and more. The computer chess experts will also join the talk in the official chatroom of the event.

Official poster – click on the images for full size 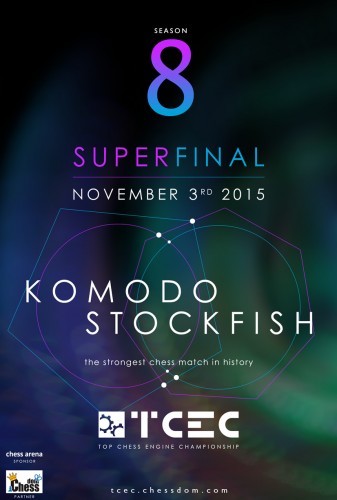 Alternative poster – click on the images for full size 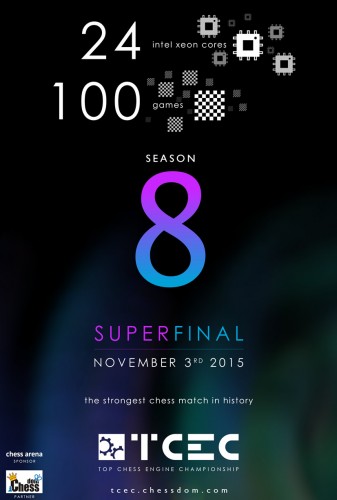