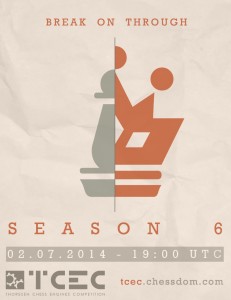 TCEC Stage 1a, the first act of the world’s top computer chess championship TCEC, was given the official start on February 7th at 20:00 CET. The first three games of the group have been played, and in all of them we have stunning results. The 3000+ ELO machines Houdini 4, Critter 1,6a, and Gull 2,8b have been held to draws by the much weaker Texel 1.03 , Gaviota 0,99b , and Cheng4 0.36c.

Critter 1,6a (ELO 3077) could not overcome with black the resistance of Gaviota 0,99b (ELO 2756). The audience is used to seeing Gaviota bringing surprises, like the one vs Equinox in Season 4, and this season with the new and improved Gaviota 0,99b, everyone is expecting even better results by the author Miguel Ballicora.

Stage 1 consists of 3 groups (1a, 1b and 1c), where each group is a single round robin meaning that all the participants play each other once. 66 games will be played in total for each group (198 for all groups) where the top five from each group and the best 6th placed will qualify for Stage 2 (16 in total).

More about TCEC rules here and at the official website (menu “help”).