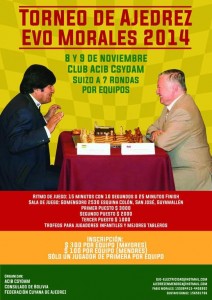 Evo Morales, who is serving as Bolivian President since 2006, played a friendly chess match against the former World champion Anatoly Karpov in 2010, that ended in a draw.

Each team will consist of 3 players, where no more than one of them should be ranked as First Category Player or rated over 2000 Elo FIDE.

You can see the tournament schedule below.