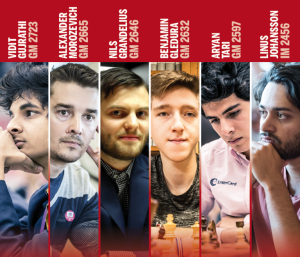 These are the six great chess players that will fight for first prize in this year’s edition of TePe Sigeman & Co Chess Tournament.

As in previous years, the tournament will be held at the Hipp Theater in Malmo and this year the dates will be 4–8th May, with a grand opening ceremony being held at the Malmo Town Hall on 3rd of May.

The organizing club Limhamns SK wishes to welcome everyone to a new chess party in Malmo.

The tournament would not have been possible without the support of the law firm Sigeman & Co, and the company TePe – Sweden’s leading manufacturer of dental products.

TePe and Sigeman & Co have been able to gather an interesting field yet again.

Swedish number one Nils Grandelius and local hero IM Linus Johansson are facing a real challenge in this year’s TePe Sigeman & Co Chess Tournament:
Vidit Gujrathi, India: The winner of Tata Steel Challengers this year.
Alexander Morozevich, Russia: One of the chess world’s most fascinating and famous chess players. He has been ranked number 2 in the world.
Aryan Tari, Norway: The new world junior chess champion.
Benjamin Gledura, Hungary: A great chess talent from one of the best chess countries in the world.

The organizing club Limhamns SK welcomes the players, spectators, sponsors and media to TePe Sigeman & Co Chess Tournament at Hipp in Malmo 4-8th of May.