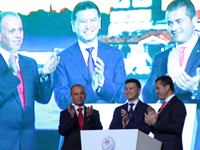 The opening ceremony of the World Chess Olympiad took place at the WOW Convention center in Istanbul.

The ceremony began with the national anthem of Turkey, followed by a tribute to historical world chess players. The audience enjoyed a rich cultural program including traditional dances.

The FIDE President Kirsan Ilymzhinov stated, “The representatives of 158 national chess federations have arrived to Istanbul to participate in the prestigious Tournament of Nations. This is the new record in the Olympiad’s history. The players will demonstrate their skill and strength of character in tense matches for the main team trophy in chess: Cups of Hamilton-Russell, Vera Menchik and Nona Gaprindashvili.”

Ilyumzhinov added, “I would like to express our sincere gratitude for holding the event on such high level. This Olympiad is another confirmation of high authority of the Turkish chess school.”

Ali Nihat Yazici thanked the government, the Ministry of Youth and Sports, the FIDE leadership, the city management and Mayor of Istanbul, and the sponsors for the essential support for the 2012 Olympiad.

Mr. Yazici said that that chess is highly developed now in Turkey and the number of chess players exceeds 235 000, with additional 60 000 chess trainers and coaches working in the chess clubs.

The Minister of Youth and Sports Suat Kilic welcomed everyone to the record breaking Chess Olympiad. Mr. Kilic said that he is very happy that the 40th Chess Olympiad takes place in Istanbul and emphasized that he will support the Turkish Chess Federation in the future, in order to see chess globally around the country. 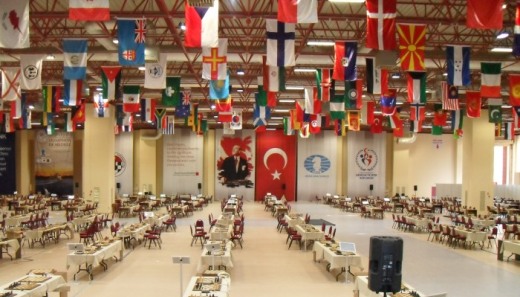 After the official anthem of FIDE and the rising of the “Gens una sumus” flag, the Chief Arbeter IA Panagiotis Nikolopoulos was invited to the scene to conduct the drawing of colors. The top seeded team in the open section Russia will play with black on the first board. The top seeded team in the women section China will start with the white color on the first board tomorrow.

The final element of the opening ceremony were the oaths of the players, arbiters, officials, and trainers.

The 2012 World Chess Olympiad is officially open, welcome to Istanbul, welcome to Turkey! 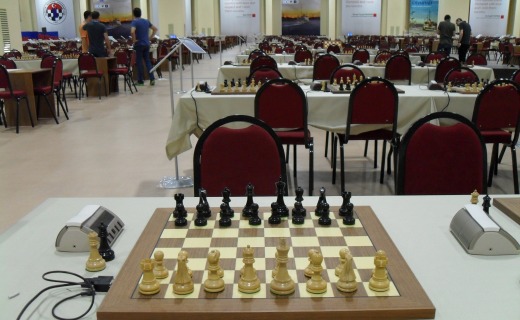 Presentation of the Turkish national teams

The presentation of the Turkish National teams took place in the Yakut Hall of the WOW Hotel Convention Center.

As the host of the Olympiad, Turkey has the right to join this event with three teams in each categories. This gave Turkey the chance to line up many strong teams, but the Turkish Chess Federation chose a different path in the name of the future of chess in the country. Instead of naming the teams B and C, Turkish secondary teams are named after the coming important years and they are composed by young talented players.

The members of the Turkish A teams are the strongest players of Turkey. The young talents of the 2016 team are following the path of their more experienced older brothers and sisters. 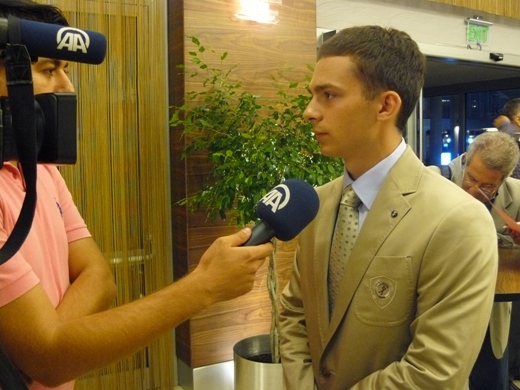 Without any doubt, the most important symbolic value belongs to the 2023 teams. As the members of the youngest teams in the history of Chess Olympiads, these small giants with ages between eight and eleven should not be underestimated.

2023 is the 100th year of the Turkish Republic and this symbolic move shows the value devoted to the future of chess and is directed to spreading chess among children.

Ali Nihat Yazıci, the President of the Turkish Chess Federation, held the microphone for the players one by one and let them introduce themselves. 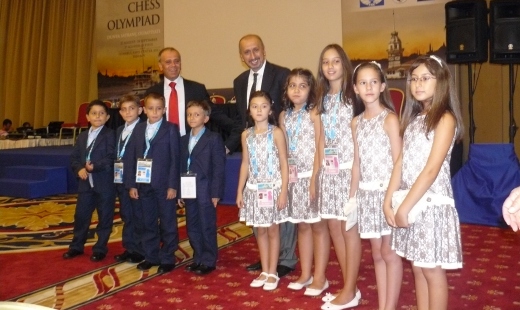 Following the presentation of the Turkish national teams, the Captains’ Meeting started in the Convention Hall of the WOW Hotel.

The Chief Arbiter IA Panagiotis Nikolopoulos announced that 158 teams are registered, of whom 128 attended the meeting.

There were several important instructions explained to the captains. Each team will receive four green cards for the players who will be in the lineup for the respective round. The 5th/reserve player will not be allowed in the playing hall. He/she can observe the play from the spectators’ stand.

It was also explained how to register the changes in the teams online – arbiters will assist in this matter.

Captains should stay behind their players at all time, the visual contact is forbidden. Discussions between the players are not allowed, neither are the draw offers before the 30th move.

The Zero Tolerance Rule shall be in effect. The mobile phones are not allowed in the playing hall. Results and pairings will be available at the receptions of all hotels.