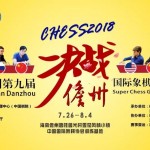 Тhe 9th Hainan Danzhou GrandMaster Chess Tournament in Hainan, China will take place from July 26 to August 4 in Danzhou, a western city in China’s Hainan province. It will be held at the China Chess Association Hainan Zhangzhou Training Base.