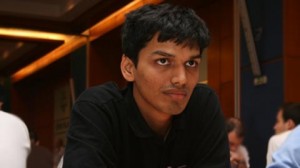 Indian press did not hide superlatives for the Asian chess champion GM Pentala Harikrishna, who started the World Cup 2011 with a victory against the World Championship finalist‘s second GM Maxim Rodshtein.

“Harikrishna is off to a flying start and made short work of Maxim Rodshtein of Israel in the first game with black in the first round,” comments Times of India, “Harikrishna’s victory was more significant as it made his task in the second game, when he has white, that much simpler. Rodshtein is almost of the same rating but his experience of having worked with Anand’s challenger Boris Gelfand must have given him the edge when they started the contest.”

Calcutta Telegraph notes, “India’s best bet, Grandmaster P. Harikrishna capitalised on an optical blunder to get the better of Maxim Rodshtein of Israel in the first game of the first round of World Chess Cup. With the victory coming with black pieces, Harikrishna is now just a draw away from making it to the last 64-stage of this 128-player knockout tournament, which is also a part of the next World Championship cycle.”

In the briefs, India press also notices the walkover of Negi and the solid draw of Gupta against Mamedov.