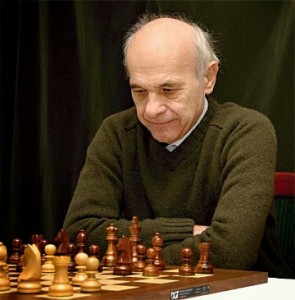 “Not only have the floods in Serbia had their tolls, but also very sad news came today: GM Dragoljub Velimirovic passed away on May 23, 2014 at the age of 72. I hope it is the last bad news coming from that direction for some time.” These halting words of Turkish Grandmaster Suat Atalik were what I saw when I opened my Facebook page this evening.

Serbian GM Velimirovic, known for his attacking style and the variation of the Sicilian Defense bearing his name, was a popular player among chess fans as well as his peers throughout his 65-year playing career.

Velimirovic was the son of Yugoslavian Women’s chess champion Jovanka Velimirović, who started taking him to chess tournaments at the age of 7. Despite the shift in government politics in his home country, he lived in Belgrade since 1960 and died a citizen of the Republic of Serbia.

He won the Yugoslavian chess championship on three occasions and was awarded the Grandmaster title in 1973. He won two silver medals at the Nice Olympiad of 1974 (individual and team) and participated in three Interzonal tournaments as part of the world championship cycle.

Read the full article by Frank A. Niro, Chess Journalists of America – http://www.chessjournalism.org