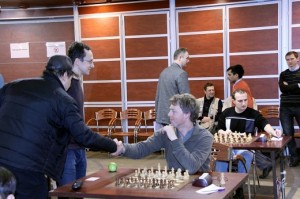 A lot of quick hand-shakes in Moscow

The last round of the Aeroflot qualifying rapid tournament saw the same scenario as the round before. All the top boards finished with quick draws, and this time not even Gata Kamsky looked for a victory, given that his qualification was absolutely certain with the half point.

At the start of the round, three players shared the first place with 6.5 points: Kamsky, Sjugirov and Mamedov. Behind them, a large group of 27 players shared the 4th-30th places with 6 points. All games played by these players finished in a quick draw of 15 moves or less.

The only “unfortunate” player of this pack who had to face a rival willing to fight was GM Mikhail Mozharov, who lost against the Indian GM Abhijeet Gupta.

Now we can only expect and see who will qualify on tiebreaks, given that more than 32 players (!) will tie for 4th place. Certainly the organizers have to think about setting some anti-draw rule for the final tournament that begins on Friday.