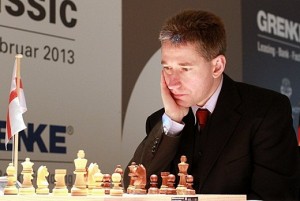 After a deserved rest day, the Grenke Classic has resumed.

The highlight of the day is the game Vishy Anand – Mickey Adams. The chess world is waiting impatiently to see what the World Champion has to offer after his impressive win against Naiditsch on Monday. The very fashionable d3 lines of the Spanish are being explored once again. As expected, it seems that this will lead to a long battle. After 20 moves, Anand has doubled-pawns on the d-file, but he has active piece play in return.

The second board sees the German battle between the solid GM Daniel Fridman and the not-so-solid GM Arkadij Naidtisch. Both players are clearly showing their styles: Naiditsch chose a sharp line of the King’s Indian Defense and Fridman responded with a positional approach. The fight is just beginning.

Tournament leader Fabiano Caruana chose the Slav Defense against GM Georg Meier. The Italian offered the bishop pair in exchange of active play on the kingside; his pawn already is on g4 and the h-file is open for an attack. This is also the game where the players have taken longer to make their moves, so a time trouble struggle probably will take place.