The Susan Polgar Foundation’s National Open for Girls and Boys hit new heights in 2015. Appearing on the West Coast for the first time, the SPFNO attracted approximately 400 players which included nearly all of the top scholastic chess players from California as well as very strong competition from every corner of the United States and beyond.

The move to the Golden State by the SPFNO wasn’t the only change for the decade old event. This year, in a first for the SPFNO and California, winners of each championship section also qualified to represent the SPICE FIDE Academy (located at Webster University, St Louis, MO – USA) at the 2015 FIDE World Youth Chess Championship in Greece. In addition to qualifying for the World Youth, girls who won their sections also received invitations to the ultra-prestigious Susan Polgar Foundation’s Girls Invitational (July 25-29, 2015 at Webster University). Opportunities for talented children to qualify for such incredible events are priceless.

What can be priced are college scholarships. For the first time in California chess history, the top High School aged boy and girl each received college scholarships to Webster University in St. Louis (value at approximately $50,000 each). Now, Sofia Stanescu-Bellu and Aaron Grabinsky will both be able to attend Webster and train with Grandmaster Susan Polgar at her state of the art chess facility. This incredibly generous donation from Webster University made the 2015 SPFNO the largest prize fund ever offered at a scholastic chess tournament in California. 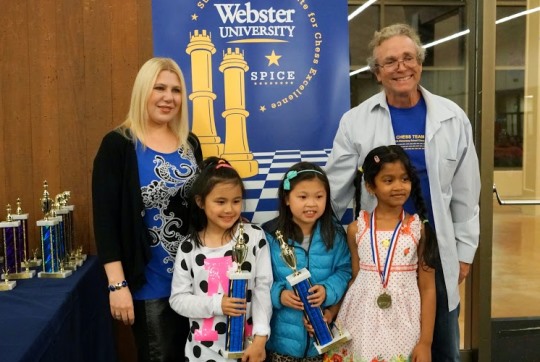 In addition to the Main Event, the Susan Polgar National Open for Girls and Boys also included many exciting side events. At the simultaneous exhibition put on by Susan Polgar, twenty-five lucky young chess players had an opportunity to match wits with the former world champion herself. The timed puzzle challenged sixty talented youngsters to accurately solve forced mate puzzles as fast as possible. On Saturday night the focus turned to speed chess. The SPFNO Blitz Tournament was a 6-round Swiss which was equally as exciting to watch as it was to play in.

One thing that attendees quickly noticed was how actively involved Grandmaster Susan Polgar. Polgar never left the tournament floor and she was constantly seen answering questions, signing autographs, posing for photographs, marking results and delivering mini-lessons. In addition to Grandmaster Susan Polgar, Grandmaster Daniel Naroditsky, International Master Emory Tate and FIDE Master Eric Schiller were all on hand to analyze the games of any child who requested their service.

The location of the 2015 SPFNO was also well received. San Mateo is located just south of San Francisco, California and the San Mateo Event Center was uber spacious. There were no crowded hallways at the SPFNO. Instead, parents were treated to spacious skittles rooms, free team rooms, a restaurant on site and grassy areas complete with picnic tables. In addition to all the great amenities the official site offered, there was also a slew of great restaurants located within walking distance of the San Mateo Event Center.

Most out of state attendees stayed at the luxurious Sofitel San Francisco Bay for an incredible “chess” rate. Located minutes away from the San Francisco International Airport and the San Mateo Event Center, the Sofitel was the ideal choice for our guests to relax in a hotel known for its French Sophistication. 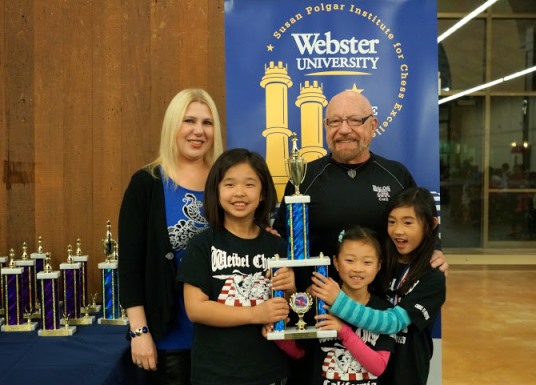 Before round three started, Calchess President Tom Langland called everyone’s attention to the front of the hall in order to recognize chess coach Ray Orwig for his thirty-five years of service to scholastic chess in Northern California. What better way to receive a Lifetime Achievement Award in chess than have it be presented by Grandmaster Susan Polgar?

On Sunday evening our expert tournament staff came in really handy when we broke ties for the World Youth qualifier prizes by way of four simultaneous sudden death blitz games. When the dust settled, Aaron Grabinsky, Ivan Ke, Chenyi Zhao and Chinguun Bayaraa had what it took to win the blitz games and the World Youth Qualifying Spots. Hats off to Tom Langland and John McCumiskey – they did an excellent job as our two chief tournament directors.

The school team sections were also very competitive. The team score was the sum of the scores of the top three players on the team. In addition, there were two unrated section for elementary school age players broken into grades k-2 and grades 3-6. As is always the case in Northern California, both Dr. Alan Kirshner of Weibel Elementary School and Joe Lonsdale of Mission San Jose Elementary School each had several opportunities to accompany their young chess players to the podium to pose for first place honors. Scholastic chess teams in Northern California always rank among the best in the country largely due to the efforts of these two fine chess coaches.

In addition to great tournament directors and coaches, the 2015 SPFNO also had the support of great sponsorship. Without the generous support of Webster University, the Susan Polgar Foundation, The Torres Chess and Music Academy, Lane Property Management and River Islands of Lathrop California, the SPFNO would not have been such a historic event for California chess.

The main event had separate section for girls and boys based on ages. Team competitions were held in each section. All of the trophy winners in every section posed for a photograph with Grandmaster Susan Polgar. Win, lose, or draw, there were many smiling faces though out the entire weekend.

I would like to personally thank all parents, coaches, volunteers, supporters, and sponsors for the incredible support. The 2016 SPF National Open for Girls and Boys will once again take place on the last weekend of February at the same spacious venue.

Below is a list of the top finishers in each section:

Other strong players in this section include