Quality Chess is delighted to announce the publication of the book The Thinkers, by the world’s premier chess photographer, David Llada.

Quality Chess has since our inception in 2004 worked tirelessly on producing chess books of high quality, no matter if they are opening books, training books or biographies, whether they are aimed at high level players or the improving player. Teaming up with the greatest chess photographer of our time will continue this ambition.

“I have been working on this project for the past five years, and I couldn’t think of a better publisher for it,” says the author.

“Quality Chess has published over one hundred books and all of them of the highest quality, yet it is my goal to make this one special.” 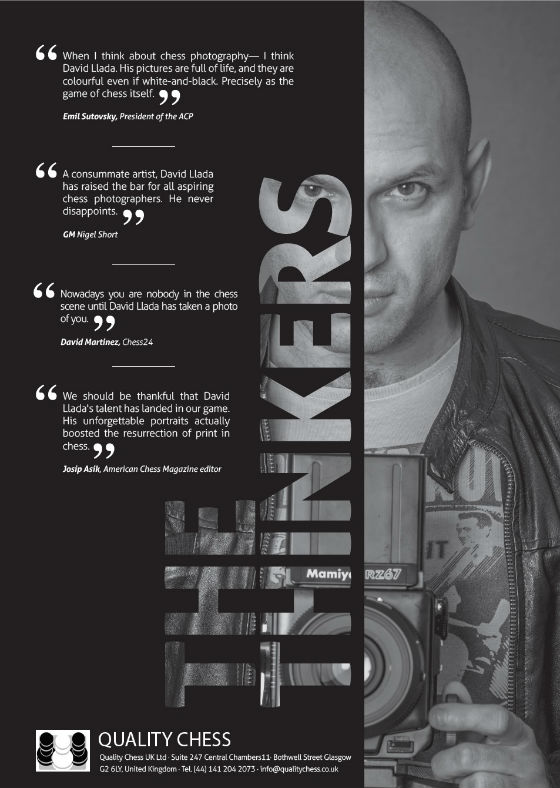 Conceived as a coffee-table book, The Thinkers will be a visual tribute to the game of chess where the “reader” will see the emotions, efforts and desires of chess players and feel the mental intensity only chess can command. The book will include some of the most iconic portraits of the contemporary stars, as well as emotional shots of everyman players. From Las Vegas to Tehran or from Mombasa to North of the Arctic Circle, David Llada has travelled the world intensively to capture the richness and variety of chess in full.

Born 1978, David Llada started a career as a chess teacher and journalist at a young age. Despite having expanded his professional horizons outside the chess world, he still finds time to cover top events as a contributor to Spanish newspaper “El Mundo”.

Llada was the official photographer of the Chess Olympiads in Istanbul (2012), Tromsø (2014) and Baku (2016), as well as the Women’s World Championship in Iran (2017). Some of his photographs have been exhibited at the Royal Festival Hall at the Southbank Centre in London and the Civilization Museum in Quebec, Canada, among others. The Thinkers will be his first photography book, following a biography on Anatoly Karpov (2006) and a manual on how to teach chess for professional teachers and parents (2016).

Founded 2004, Quality Chess has published the highest revered training books for the average chess fan and top grandmasters or those that aspire to play at that level. It is the leading publisher of opening books and has dominated in the selection of the most prestigious awards in chess publishing. A part of the company’s mission is to curate as well as add to the great cultural heritage of the game of chess.