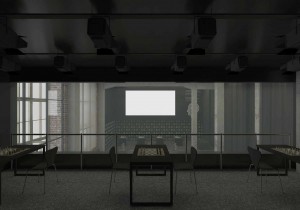 The Candidates Chess 2016 that begins next week in Moscow will be held in historic and architecturally impressive building and will have a state-of-the-art design and production features for the players.

The interior space where the players will compete and the spectators can watch has been designed by Novoe Architectural Bureau. It is a fully integrated area with distinct spaces for the competition, for news conferences, and for spectators who want to watch the games directly, listen to commentary or possibly play some games themselves.

There is a glass-enclosed VIP area, which is sponsored by Beluga, that overlooks the playing area, much like a sky-box in regular sporting events.

Most importantly for the live broadcasting of the games and the commentary, by which most fans will be able to see the competition, there is a spacious television studio that overlooks the visitors’ area and playing hall.

The following photos by World Chess / Novoe Bureau give an idea of what the space and the television studio will look like.

More about the Candidates

Pairings of the Candidates 2016

All news from Candidates 2016