The penultimate round of the Thessaloniki Grand Prix has set the stage for exciting final round on Monday 12:00 local time.

Gata Kamsky celebrated his birthday with a quick and convincing victory against Alexander Morozevich, who suffered fourth consecutive loss.

Leinier Dominguez survived Alexander Grischuk’s assault to stay in the contention for the first place. Fabiano Caruana bounced back after yesterday’s loss by defeating Veselin Topalov in a wild game. 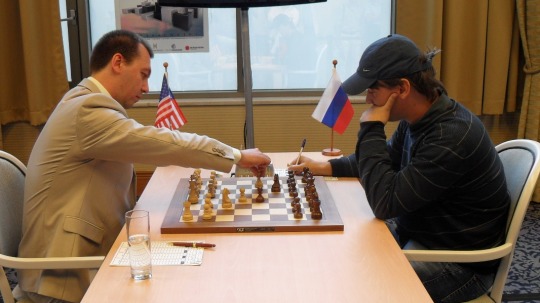 This was a rare occasion that Kamsky didn’t shy away from the explored theoretical position. In the Chigorin variation of Ruy Lopez black played the rare plan of trading on d4 twice and then 13…Re8.

This was not new for Morozevich, who already used the same setup against Peter Leko back in 2002. White’s 14.Nc3 (also played by Ivanchuk once) looks more natural than Leko’s 14.Bg5. Kamsky didn’t remember exact theory but he believed that Knight on f5 would create some threats.

Nevertheless, his plan of lifting the Rook to g3 also posed serious problems for black.

The last chance for black to defend was to harrass the Rook with 20…Ne5 21.Rg3 Nh5, trading a couple of pieces in the process.

This time Svidler started with 1.e4 but Kasimdzhanov was ready to repeat the Ruy Lopez Arkhangelsk variation which brought him success against Ponomariov in round 8.

White refrained from the main 8.c3 and instead went for the pair of Bishops with 8.Nxe5. It is interesting that both players already had this line in practice – Svidler drew Caruana and Kasimdzhanov beat Salgado Lopez.

White repeated the recent novelty 12.Qd3, but black came up with his own improvement in 14…Qe7.

The players have shown some fascinating lines at the press conference, but nothing of those fireworks were actually seen in the game. After the constant exchanges of the pieces, the game fizzled out in a draw.

Nakamura’s King’s Indian defence was met with fianchetto and black continued to set the Panno variation.

On the 16th move Ivanchuk had a dilemma where to move the Bishop. From a1 it controls the long diagonal and maybe white can push f4 later. But from a3 white could sometimes threaten a sacrifice on c5 or Bishop could fall down to c1 and move to a better diagonal.

Nakamura said that 22.Bb2 might have been stronger. Ivanchuk looked at some lines and agreed that this move was better, he regretted that he missed it. One of the lines would be 22…Ne5 23. Bc3 Nb7 24.Nxd7 Qxd7 25.Rb6. Nakamura then suggested 22…Be5, to which Ivanchuk thought for awhile and then found 23.Bh3 as a strong reply.

24…g5 was a very strong move (Ivanchuk), without this black is much worse (Nakamura). But after brief analysis Ivanchuk found 25.Bxe5 bxe5 26.Nxe4 g4 27.Ng5 to be very promising.

In the game he played 25.Bc3 and later draw was reached by repetition.

Grischuk used the popular 3.f3 against the Gruenfeld Indian defence but was very critical of his preparation because he completely neglected the line with 8…e5.

He somehow remembered the plans used in the match Anand – Gelfand and in the game Rodstein – Navara, to include d6 and Kb1.

Dominguez said he couldn’t remember much of the theory but he was able to introduce a novelty and improve black’s play. After the exchange sacrifice, he went after the c3-pawn, leaving the e4-pawn alive for the time being.

Grischuk proposed 24.Qd5 as interesting (Qxd5 25.exd5), but he thought he was completely winning with the game move. Just as he was expecting black’s resignation, Dominguez stunned him with 24…Nxc3+. Grischuk thought it was just prolonging the agony, but a deeper look revealed that it is quite dangerous for white.

Dominguez said he repeated the moves because the position was very complicated and he was low on time. Possible was 33…Qd4 and if 34.Nxg4 then Qb4+ and black gets f5-square for the bishop. However, 34.Bd3 is better.

The game was drawn by perpetual check.

The game started as Italian opening but it soon reached the familiar Ruy Lopez contours.

Ponomariov wanted to keep as many pieces as possible on the board and press for a win because today was his last game with white pieces.

The position was somewhat better for white throughout the middlegame, as he had more space and a pair of Bishops.

In Bacrot’s time trouble, white finally pushed f4-f5 and black had to make some important decisions with only minutes on the clock.

He decided to exchange the minor pieces, but Ponomariov dubbed this as a mistake and suggested that black should have kept the Knight on g7, as it is good defender of the King.

After 46.dxc5 white knew that he was winning, but he spent a lot of time trying to find the best way and hoping to avoid the scenario from the game against Rustam Kasimdzanov – “Chess is such a strange game. Sometimes you are trying to increase your advantage but then you make a few inaccurate moves and can even lose the game”.

This was certainly one of the most exciting games of the whole tournament. It started bad for Caruana, who played black pieces after an unpleasant loss in the previous round.

Topalov continued to insist on the Ruy Lopez with quick Nc3-Nd5. Black reacted poorly and was forced to concede the right to castle.

White kept on pressing and Caruana admitted that he had difficult time finding the only moves in a long sequence. He said he had missed 20.Ng5 and that Rc8 was his only chance to play on (20…Rh5 simply 21.f4).

Black’s persistence was rewarded as white erred with 25.Nxd6, when a simple 25.c3 would retain solid advantage. Caruana believes that Topalov probably missed that he is losing the piece after the odd-looking 28…Kf8, or maybe he didn’t see that 30.Re7 would be met by 30…Qd4+ 31. Kh1 Qxd5.

The position remained immensely complicated as white got compensation with his central pawns rolling on.

As the fatigue grew and the second time trouble approached, the players started exchanging mistakes. Caruana honestly said he had no idea what was happening and whether he was supposed to play for a win or for a draw.

The old saying that the player who makes second to last mistake wins is perfectly relevant for this game. Topalov’s final chance to save the game was the stunning 55.Rxa2 Qxa2 56.Qh4+ Kg8 57.Qg5+ with perpetual check, but he missed it and was forced to resign few moves later.