Fabiano Caruana and Gata Kamsky won their games in the 6th round of Thessaloniki Grand Prix to join Leinier Dominguez in shared lead.

Vassily Ivanchuk collapsed again and lost to Ruslan Ponomariov after only 19 moves and barely 30 minutes of play. 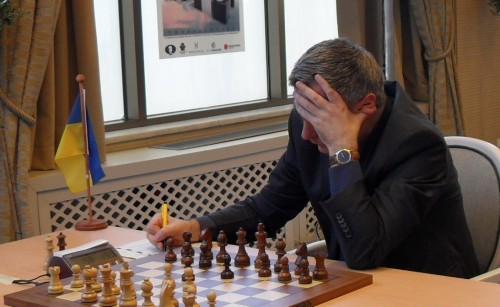 Again the game of Vassily Ivanchuk finished quickly, as the legendary Ukrainian fell down to his compatriot Ruslan Ponomariov.

The match started as French defence and the commentators were hoping that this was a signal of Ivanchuk’s desire to play for a win.

White responded with Tarrasch setup and the players went on to build the familiar pawn structures. Ponomariov kept his options open, with possibility to play on either of the flanks.

Ivanchuk underestimated white’s flexibility and carelessly castled longside. White immediately sprung into action and only three moves later the game was over. Black is losing a pawn and the King remains under constant attack.

Ivanchuk apologized to Ponomariov – “I am sorry that I played this bad”, and then resigned.

Ponomariov said that after five draws in a row he wanted to play for a win. Yesterday he missed some chances against Grischuk and is happy that today he won so quickly. 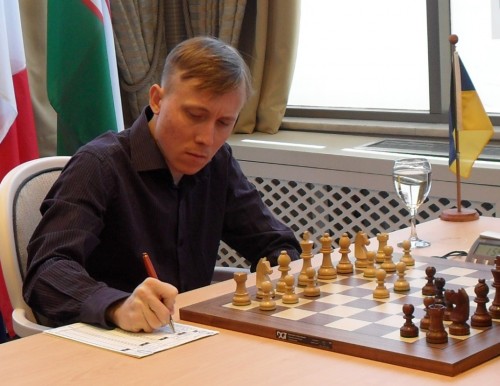 On question about opponent’s form, Ponomariov said that it would have been easier for Ivanchuk if this was a knockout event where – “…You lose and you go home, but here you have to stay until the end and suffer.”

About the World Championship match in Chennai, Ponomariov said – “Everyone is claiming that Carlsen is clear favorite to win the WCC match, but as you can see he also loses some games. Besides, the match is being held in India, so I don’t think everything is so clear.”

“Having been World Champion at the age of 18, I am always rooting for younger players, so I am Carlsen’s fan in this match.”

The Italian Grandmaster refrained from Ruy Lopez and used the Scotch opening. He has pleasant memories about the system as he used it to defeat the great Vladimir Kramnik.

Caruana said his preparation finished after 21.f3, where computer is giving advantage to white, and pointed that e5-e6 is a very dangerous threat. He showed some beautiful lines during the press conference, but nothing of this was seen on the board where white actually found a neat way to transpose to R+B vs R+N endgame with an extra pawn.

This was the third endgame in this tournament where Caruana was playing for a full point, and having failed to win in previous two, he really wanted to convert this one. 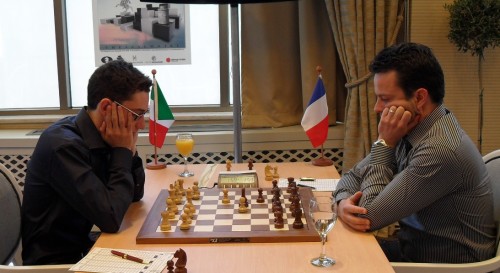 Bacrot was hoping to take advantage of the pin along the a-file, but white saw that he can always untangle in a very convenient form.

Black’s 35…c5-c4 advance came as a small surprise. Caruana saw some counterplay after 36.bxc4 Ne4, when the Knight starts jumping around, and “decided to go with 36.b4 which is winning”.

The two Alexanders, who kept confusing our commentators used to mention the players by their first names, were involved in an interesting discussion of a Ruy Lopez sideline.

Grischuk played the quiet 5.d3, and Morozevich answered with kingside fianchetto, carefully preparing the expansion with the pawns.

Black pieces started looming around the opponent’s King, but the timely reaction in the center allowed white to weather the storm.

Grischuk said that he played in a logical manner, he didn’t see many alternatives, just kept going with the natural moves, bu Morozevich played creatively and kept posing challenges.

The draw was recorded shortly after the time control. 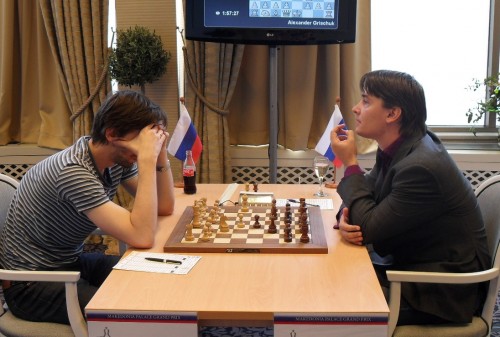 Another game with d3 in Ruy Lopez, only this time played on the 6th move. The setup was similar to Dominguez – Svidler, but Kasimdzhanov jumped his Knight to a5 instead of d4. He considered this to be a slight improvement.

Topalov was satisfied after 12.b4 – “I like this structure. But sometimes this pawn can be a target for counterplay with a6-a5.” He critisized 16.h3 and felt that is was unnecessary – “I saw something like he pushes d6-d5, I answer e4-e5, and his Knight jumps to g4. I am not sure if this was any good.”

About the exchange 18.bxc5, Topalov said – “I was not afraid of advance c5-c4 because I always have this nice Bb4.”

22.f4 might have been a little too ambitious as it allowed Kasimdzhanov to sacrifice a piece for two pawns and get the avalanche rolling. Rustam believed he was nearly winning after 24…Qxc2. 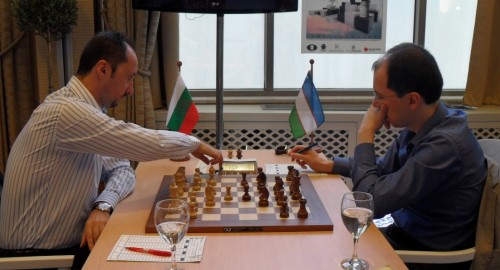 Apparently Topalov wasn’t too concerned about the pawn mass, but later he admitted that he underestimated its potential.

There was an interesting endgame with B+N+2P for white and R+4P for black. Kasimdzhanov was definitely pressing for a win, but with reduced material and accurate defence Topalov held a draw.

The play developed slowly with lots of maneuvering, but as the time was passing by, white attained better pawn structure.

Black decided not to wait too long and started operating on the kingside. However, the position opened to white’s benefit.

The game still remained very complicated and Kamsky was not sure by how much he was better until he played 42.Rh2. Already after the next move Svidler resigned. 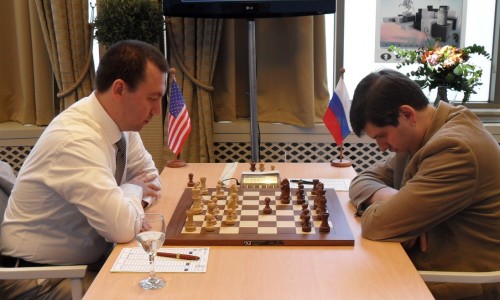 We are already used to have Hikaru Nakamura playing the longest game of the day and closing the press center with the final interview.

Today he surprised the tournament leader Leinier Dominguez with the Scandinavian defence. In any case, the Cuban couldn’t really prepare for the last two rounds because his computer was broken.

According to Nakamura, 7.Bd3 was a clever way to take advantage of black’s move order. He also considered 8…e6 to be a mistake and said that he planned 8…Qa6 (recently played by tournament commentator GM Papaioannou), but he can’t explain why he forgot about it.

10.Qg3 reminded black that he will have serious trouble to get the King into castle. Nakamura suggested that he should have dug in with Be7 and if Bf4 to play Qc8, where he is clearly worse but he could play on – “After 14.Qxf6 black is simply lost”. 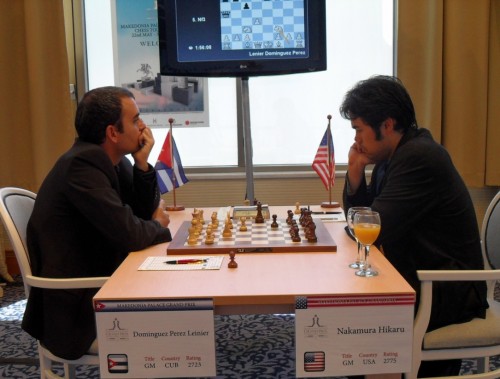 Nevertheless, the American put up a stubborn defence. It looked like Dominguez was trying to always be on the safe side, but he said he just played a normal game.

The players have agreed that 34.f5 was premature and that it was better to start with preparatory 34.Ke3 and then f5 on the next move. Dominguez confirmed that the resulting endgame was winning but difficult to convert.

Nakamura said he was preparing to resign, but he changed his mind when white traded the Rooks with 46.Rg4 “because then suddenly black has drawing chances.”

Both players promoted to Queens and the resulting endgame is worthy of teaching manuals. It looked like white should be winning, but the magical dance of black pieces saved the draw for Nakamura who defended brilliantly.

The players have suggested possible improvements for white – probably 60.Kg7 instead of 60.h5 should win because black king cannot move closer. Also 61.Kg5 was mentioned by Nakamura.