Leinier Dominguez defeated Fabiano Caruana with black pieces to join Gata Kamsky in the shared first place with 6,5 points each. American champion was held to a draw by Etienne Bacrot.

Veselin Topalov scored against Alexander Morozevich who extended the losing row to three rounds. The other four games were drawn.

Caruana is third with 5,5 points, while Grischuk is fourth with 5 points. 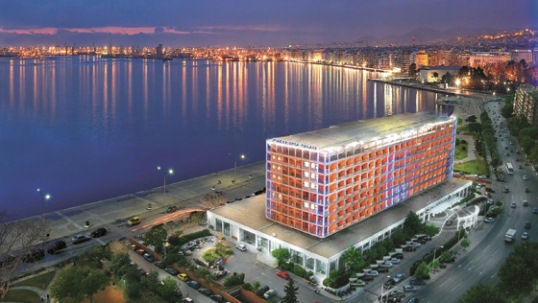 The tournament leader started with the Chebanenko Slav but he quickly fianchettoed the dark-squared Bishop to reach his favourite pawn structure of Slav-Gruenfeld hybrid.

Kamsky said that he analysed this line for awhile, the conclusion being that white is slightly better but the position is playable.

Bacrot was unhappy about his play in the opening. He moved 11.Qc2 because he wanted to push e4, but then admitted that 11.Rd1 might have been better.

Both players agreed that 15.Bd2 was too slow and that the most consistent was 15.a3. Bacrot added that 16…Re6 was very strong.

Black kept pressing on the weak isolated pawn but white was able to recapture on e7 and maintain the material balance.

The resulting endgame was slightly better for black, however white succeeded in setting a theoretical draw and the game concluded shortly.

Kamsky revealed that he walked on the street and black cat crossed his road, so he decided to play solid. Bacrot joked that despite the cat the black position was very good. On question about his own superstitions, Bacrot said – “Just in case I decided not to walk today.”

Kasimdzhanov started with the Moscow variation in the Sicilian and Ivanchuk covered the check with his Bishop, deviating from 3…Nc6 which he played in round 4 against Topalov.

The play developed along the well known lines which have already be seen in many games. 17…Nc6 was regular, but black developed the Knight to a6 with idea to jump to c5.

Kasimdzhanov thought that long castle was a good move. He wanted to keep the Knights on the board, but he couldn’t avoid the exchange because f2-pawn was hanging. He added that after 36.Re4 it became interesting because there were some chances for white.

When playing 45.Rxh7 Kasimdzhanov became excited because he thought he was winning, but “45…g5 was a great move that saves the game”.

Topalov returned to Caro-Kan caughting Morozevich by surprise and making him pause for a few minutes before continuing with the Advance variation.

Topalov criticised 20.a4 “because it makes too many weaknesses”. He mentioned 20.a3 as better, when both players would probably have doubled rooks on the c-file.

The engine insisted that 23.Nc5 Bxc5 24.Ra4 would grant some advantage to white, but Topalov didn’t really believe it – “I can always sacrifice the queen for material, so maybe 24…Nxa5”.

After one error by white, black seized the advantage and never let it go. He didn’t play the objectively best moves, but he wanted to make sure to prevent any kind of counterplay.

One final mistake by Morozevich allowed Topalov to execute a cute checkmating combination.

Already on the 2nd move the game became interesting because Nakamura decided to go for the Veresov Attack. 3…e6 4.e4 would transpose to the Classical French which is not in Ponomariov’s repertoire.

The commentators were pleased with black’s maneuver Rd4-f4 and FM Logothetis pointed that the similar strategy was often employed by the legendary Capablanca. However, Ponomariov criticised this excursion and suggested 17…Rac8.

With 21.c4 white created some pressure and continued to play for the win. Black didn’t want to sit passively and sacrificed a pawn to obtain some counterplay.

Black activated both Rook and Bishop and managed to repeat the moves.

Svidler used the rare line in the King’s Indian defence that he saw in game Aronian-Radjabov at London Candidates. In preparation he looked at the variations with his second GM Vassily Emelin.

Svidler confirmed that after 22…Qe5 white was fighting for equality, but already around 26.Qb4 he thought that white was fine. He was much more worried when he saw that black has 29…Nc7, but Grischuk played something else.

Grischuk didn’t want to interfere much in Svidler’s presentation, and instead “waited for his turn to explain what happened.”

“The game consisted of two parts,” Grischuk started, “In the first part white was badly outplayed, so bad that I don’t even want to make jokes about it.” Starting after 22…Qe5 he thought he was completely winning.

“And then we saw the 32nd episode of ‘lucky fish escaped from the whale'”, Grischuk teased his friend. Around 29.Qd4 white was playing very well. After 35…Nd7 black was hoping to play Ne5 and dominate the bad bishop but white was slowly improving and finally the game was drawn.

“Peter has an overwhelming score against me, something like +50.” – Grischuk concluded.

Heading into the rest day, the two players were sharing the second place just half a point behind Gata Kamsky.

The fans were asking Dominguez to play the Naidorf Sicilian and the Cuban kindly fulfilled the wish.

After black prevented the g4 advance in English Attack (8…h5), the game took a more positional character. Caruana’s trainer GM Chuchelov said that they were looking at this particular line in their preparation.

Black decided to exchange the Queens and accept a slightly worse position but with plenty of possibilities for counterplay. Black’s operation started with 23…e4, the point being that 24.Nb5 Rxb5 25.cxb5 Ne5 is good for black.

A couple of moves later, Caruana couldn’t delay Nb5 any longer, and black happily sacrificed an exchange because he saw that his pieces will be very active.

The position was finely balanced but white had difficult time finding some open files for the Rooks.

Dominguez pointed that white missed his last chance at 45.Rf1+ Ke5 46.Rxf6 Rxf6 47.Rxe4, after which the game would be drawn.

Black then assumed the advantage and later converted it into full point.