Veselin Topalov and Leinier Dominguez won their games in the 4th round of the Thessaloniki Grand Prix to catch the other five players in the shared lead.

The remaining games were drawn, but not without fight. Morozevich and Nakamura played the spectacular game in Naidorf Sicilian. Caruana pressed for a long time but Kasimdzhanov was able to hold on to a draw.

Kamsky and Ponomariov had a fairly even position until the American made a mistake. However, the winning sequence was visible only to the computer eyes and the game ended in a draw. 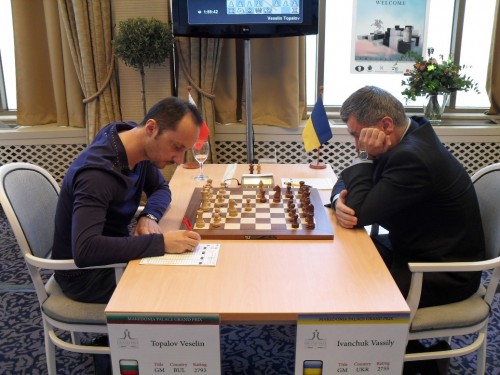 The game started as a Rosolimo Sicilian, which is nowadays a popular way to avoid the deeply explored Sveshnikov.

9.g4 was supposed to be better for white, according to GM Ioannis Papaioannou, but he quickly added “of course Topalov knows better”. The Bulgarian spent a lot of time in the opening, but it looks like he found a good way to put the black setup to test.

White was slightly better until Ivanchuk decided not to recapture the pawn on e6. Immediately on the next move Topalov pushed e6-e7 and locked the black King in the center.

Black’s position collapsed and he resigned a couple of moves later. 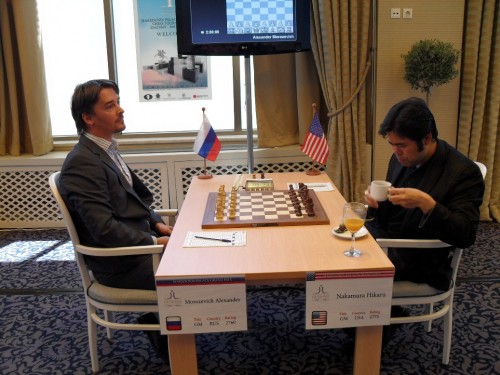 Namakura started with the Sheveningen Sicilian, but the play quickly transposed to the reputable English Attack. The American obviously didn’t mind this setup, but he probably wanted to avoid 6.Bg5 in Naidorf Sicilian, which is again springing to popularity.

Morozevich deviated from the main theory as early as on move ten, pushing the pawn to a3. This indeed slows black’s counterplay for awhile, but it can also turn to be a convenient target for b5-b4 later on.

A sharp battle, typical for the opening, ensued and soon Morozevich offered a Knight sacrifice on b5. Nakamura delayed the capture until his Queen moved to a more active place.

Black King was stuck in the center and white gave up the Queen for R+B to keep the attack going. Nakamura, however, quickly found a way to take the game to draw with perpetual check. 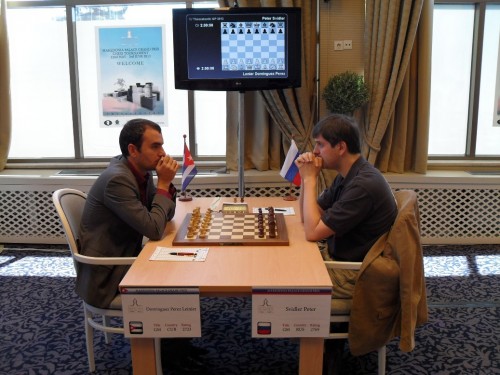 The game started as Ruy Lopez and white chose the quiet but popular 6.d3. He proceeded to develop with the positional 8.Nc3!? and then created a “luft” for the Bishop with 9.a3.

Black challenged the Bishop with 9…Be6 and invited a change in the central pawn structure.

White attempted the get the action going on the kingside, to which Svidler replied with a counter on the queenside.

After some exchanges of the pieces, Dominguez managed to “trick” the opponent and capture the a-file to threaten with heavy pieces on both sides of the board. Dominguez said that 23…d5 was a mistake, he expected 23…Rxc2.

After this the black position was already difficult. Svidler made a couple of inaccuracies while under the attack and Cuban wrapped up the game efficiently.

Dominguez said in the press conference that he made a good opening choice, because he managed to create some pressure thanks to the pawn structure. “It’s always nice to play in front of a large crowd”, he added. 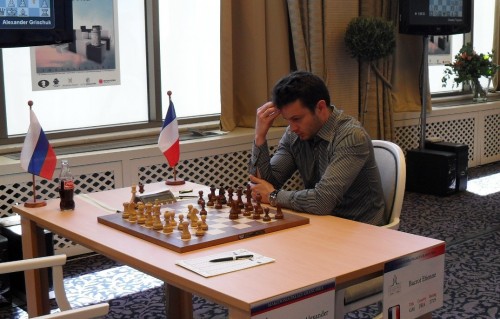 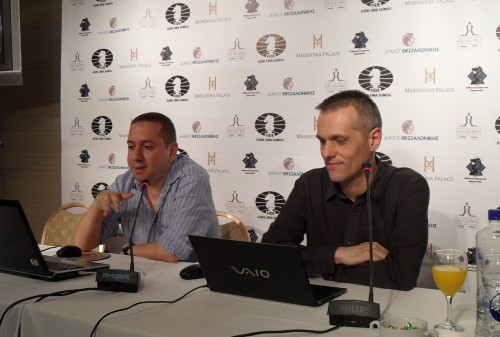 Grischuk said he succeeded to take Bacrot out of the preparation, but was unable to transpose to the Catalan. b3 is interesting and leads to reversed Gruenfeld. White retained a minimal advantage, mostly due to the access to c5-square and passivity of black Bishop.

White tried to put pressure on d5, while black pushed 23…e4 trying to create counterplay. Black gave up the a7-pawn, but the Russian quickly returned the favor with 29.Qa3, as he said “not to blunder the piece”. He suggested 29.Qd4 instead, but it looks risky and he was already low on time.

Bacrot defended very well and managed to trade all the pieces down to the equal Rook endgame. Draw signed on move 53. 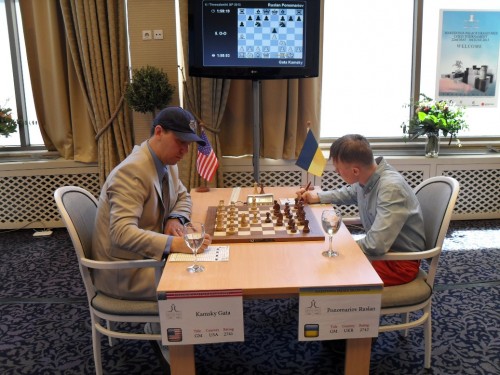 Ponomariov defended with Zaitsev Ruy Lopez and Kamsky went for the rare 12.Ng5, forcing the black Rook to an awkward square e7. Kamsky said he was happy to repeat this line as he used it to defeat Veselin Topalov in the match in 2009.

Black deviated from Topalov’s 13…Nb8 and continued with the more concrete 13…Na5, which was already validated by Karpov in an 1980 game.

Ponomariov sacrificed a pawn to activate the Queen and threaten the white King. Some precision was needed to avoid the back-rank disaster.

Kamsky made a mistake shortly after the time control, but neither player was aware of the computer-like Queen maneuver which quickly wins for black. Ponomariov was in shock when FIDE Press Officer showed him the line.

After black missed his chance, the game was drawn on move 54. 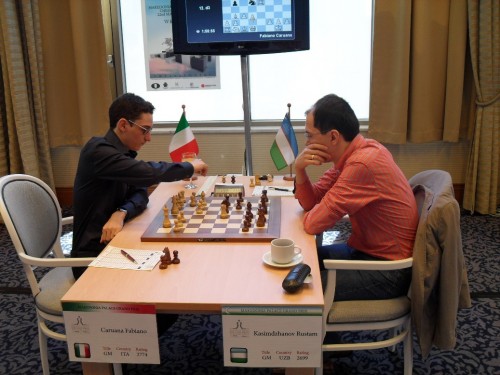 Caruana allowed Kasimdzhanov to play the proper Marshall Attack in the Ruy Lopez, a rare occurrence in the modern top tournaments.

White returned the pawn to conveniently transpose to a slightly better endgame where he could play for two results without any risks.

An endgame with white R+B vs black R+N emerged and Caruana kept pressing for a win. For more than 40 moves the players maneuvered around trying to probe the weak pawns.

There was the three-fold repetition on moves 58, 60 and 72, but the players missed the opportunity to make a claim. Nevertheless, the draw was signed only four moves later. 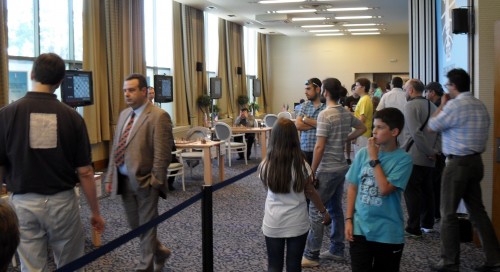 Leinier Dominguez: “It’s always nice to play in front of a large crowd”