The fifth stage of the Grand Prix Series has begun in Beijing. A lineup filled with fighting players guarantees that we will see the kind of combative games we saw today throughout the tournament.  FIDE Vice President Chu Bo  made the first symbolic move 1.d4 in the game Gelfand-Topalov.

The first day brought three decisive results, all with the black pieces. Former world champion Veselin Topalov, rating favorite Sergey Karjakin and Alexander Grischuk are now the early leaders.  The rest of the games finished in draws but not without a fight.

The most interesting game of the day was the one that faced Tal Memorial winner Boris Gelfand and Bulgarian star Veselin Topalov. Both players showed their deep preparation in a sharp line of the Gruenfeld. Let us not forget that both of them had to prepare this defense fiercely to face Viswanathan Anand in their previous World Championship matches.

The game saw Gelfand playing ambitiously, quickly getting a far passed d-pawn that needed very active piece play to stay alive. Topalov, in return, after untangling his position, got an advanced c-pawn and good play with his rooks. The decisive mistake shown by the computer was Gelfand’s 29.Qa3, which was played in an extremely sharp position. Finally, the Bulgarian managed to dominate the position completely. Gelfand resigned on move 41. 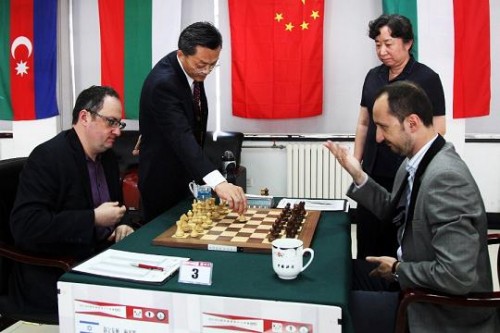 The young Russian Sergey Karjakin was perceived as a quite experienced player in his game against 19-year old Anish Giri. The Dutch player, who comes from beating Vassily Ivanchuk in a match played in Leon, was not able to break Karjakin’s Berlin Wall and even ended up falling in front of it. Giri got the first position in the cross-table, so he will have the chance to redeem himself with the white pieces tomorrow.

The players demonstrated their deep preparation in the super solid Berlin System. The resulting position after the opening was quite sharp, as white decided to sacrifice a pawn in exchange of activity. Karjakin chose the correct setup to defend and got control of the position. Despite the presence of bishops of opposite colors, Karjakin’s material advantage of two pawns proved to be enough to get the full point. 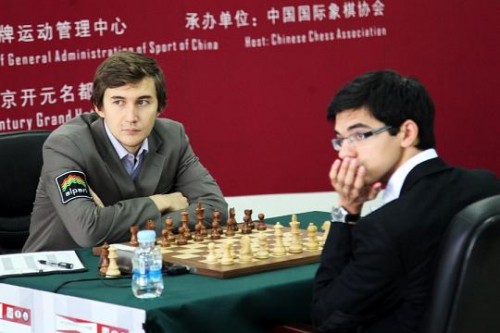 The most tragic game of the day was the “Chronicle of a Dead Foretold” as Colombian writer Garcia Marquez would call it. Two players that show the biggest time-trouble problems in the elite faced each other, and the final result was predictably decided by this factor. Alexander Grischuk got his first win after Gata Kamsky let his flag fall in a time trouble frenzy.

Kamsky’s problem can be explained by the fact that his opponent played a critical line in the Sicilian, where black almost completely gives up hopes to get activity in exchange of a pawn. The American looked for ways to activate his pieces in order to exploit this factor but fell short on time and had to shake hands in resignation in a position that the computer judges as equal. 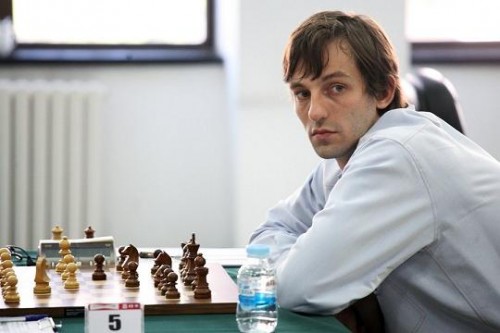 The rest of the games finished in draws. The only one that did not get to the first time control was Vassily Ivanchuk – Wang Hao, where the Chinese forced a three-fold repetition on move 29.