On November 10 in the Novotel Moscow City Hotel the 6th and next to last round of the International TASHIR Chess Tournament in Memory of Tigran Petrosian was played.

In the game Levon Aronian vs. Alexander Grischuk the Armenian grandmaster demonstrated an interesting novelty in the Gruenfeld Defence. It was connected with a pawn sacrifice, for which he received a solid compensation in the form of white pieces’ activity.

The Russian player had spent a lot of time but in the time trouble found an accurate defensive plan and managed to parry all the opponent’s threats with the only moves – in the truest sense of the word “only”. The game was drawn by move repetition. 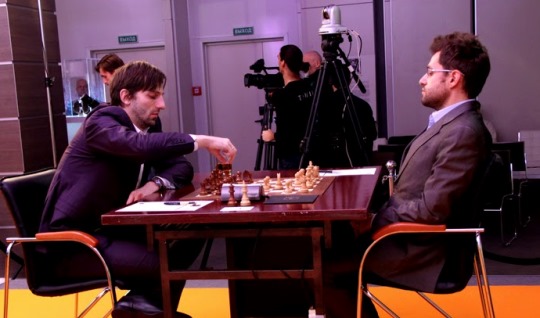 Vladimir Kramnik scored a spectacular win over Alexander Morozevich. Playing with White, the ex-champion of the world launched an attack against his opponent’s king and, in the heat of the fight, sacrificed an exchange.

Until a certain crucial moment Black’s defence had been accurate, but on his 29th move Morozevich committed an oversight that allowed White to create a dangerous play around the enemy monarch. Kramnik managed to find a beautiful blow, and soon the outcome of the game was decided in White’s favor. 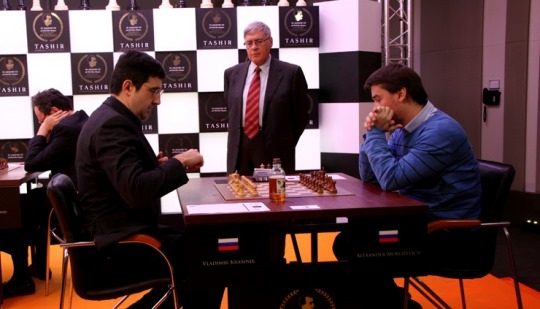 Playing White against Boris Gelfand, Ding Liren failed to obtain any significant advantage in the opening; with precise play the Israeli grandmaster was able to achieve equality. Still, the end game turned out to be more pleasant for White, and Gelfand had to play rather accurately in order not to find himself in a difficult situation.

The 2012 vice-champion of the world dealt with this problem quite successfully.

Peter Leko and Ernesto Inarkiev also drew their game. Playing with White, Leko sacrificed a pawn for the initiative in the middle game, but that turned out to be insufficient for creating more serious threats. The game was drawn in the deep endgame.

After the 6th round the leader is Alexander Grischuk with 5 points; Vladimir Kramnik is one point behind him. In the final round the leaders are going to face each other.