The top two boards ended in draws as the majority of Grandmasters started to face each other in the second round of the Dubai Open Chess Championship – Sheikh Rashid Bin Hamdan Al Maktoum Cup at the Dubai Chess and Culture Club.

Employing the Queen’s Indian Defence, top-seed Grandmaster (GM) Ivan Cheparinov of Bulgaria was on the back pedal against India’s GM Debashis Das before squeezing out a draw in 75 moves. Cheparinov dropped a pawn on move 38, but the double rook ending with all pawns on the kingside ensured that the Bulgarian had good chances of holding the draw. Das won a second pawn on move 59 to create two unopposed passed pawns, but his rook was passively defending both pawns and his king was trapped in the first rank constantly under threat of mate, while Cheparinov’s rook and king enjoyed maximum activity to keep the game balanced. 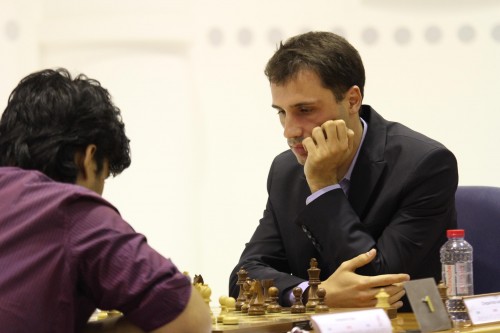 On second board, third-seed Armenian GM Gabriel Sargissian agreed to a draw by repetition on move 27 with another Indian, International Master (IM) Aryan Chopra. Ukrainian GM Anton Korobov, the other half of the tournament’s joint top-seeds who was earlier held to a draw in the first round, bounced back with a win over India’s Aradhya Garg to join Cheparinov and Sargissian in the chasing pack of 1.5-pointers.

Mirroring his performance in the first round, British fifth-seed GM David Howell again sacrificed his queen for two rooks against IM Rohan Ahuja of India and at one point had almost the same material on the board as his previous game – two rooks and bishop against queen and knight. Howell converted to a winning rook-versus-knight endgame to secure the win in 43 moves. Georgia’s Baadur Jobava had a clinical win over another Indian title pretender, IM Rathnakaran K., whose queen sacrifice for a rook and minor piece proved insufficient against the sixth-seed and three-time champion of Georgia.

Reigning Asian champion GM Salem A. R. Saleh of the UAE, seeded 18th in the tournament, played an inspired tactical game against India’s Gusain Himal, sacrificing his rook on the 15th move to open up the position. The Indian gave up his bishop to derail the attack, but Saleh’s dominating bishop on the d5-square was a menace that anchored the win in 56 moves.

FM Saeed Ishaq, meanwhile, bounced back from his unfortunate setback against Howell in the previous round by beating compatriot FM Mayed Alrashedi. Other winners from the UAE were FM Nabil Saleh over India’s Basheer P. V. and Candidate Master (CM) Nagueb Saleh over Azerbaijan’s young talent Matin Mursalli.

Meanwhile, GM Enamul Hossain, seeded 68th in the tournament, and the Netherland’s IM Robert Ris, seeded 70th, turned the tables on their respective much higher-rated opponents, 11th-seed Eltaj Safarli of Azerbaijan and 15th-seed GM Yuriy Kuzubov of Ukraine, who proved to be the biggest casualties of the day. 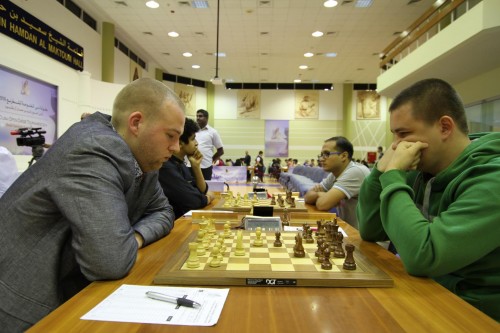 A total of 33 players remain in the lead with two points each after two rounds of play. The third round will pit Howell against Turkey’s GM Emre Can on board one, Baadur against India’s G. N. Gopal on second board and an all-Indian encounter between Adhiban and junior standout GM Aravindh Chithambaram on board three. 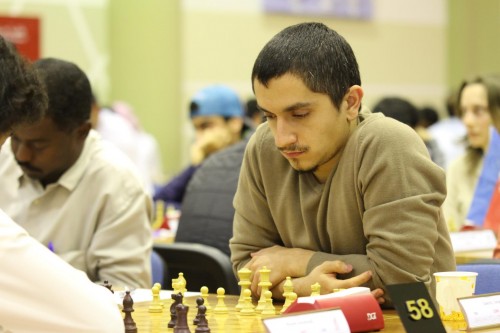 Meanwhile, some 80 players are expected to register for the Dubai Open Blitz Cup, which will be held on the rest day on Friday (April 15). The blitz tournament, which offers a total prize fund of US$4,000, will be played according to the Swiss system format and will have 11 rounds. Time control is three minutes plus a two-second increment for each move. The deadline for registration is on Thursday evening.

The tournament games are being broadcast on the club’s website www.dubaichess.ae, as well as popular chess sites such as Chess24, Chessdom, Playchess and Chessbomb.