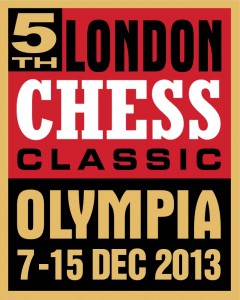 Chess in Schools and Communities is delighted to announce today that the six leading English players, Michael Adams, Luke McShane, Nigel Short, Matthew Sadler, David Howell and Gawain Jones have accepted their invitation to play in the 5th London Chess Classic to be staged at the Olympia Conference Centre in Kensington, running from Saturday 7th December to Sunday 15th December.

Since then, the popular Cornishman has seen a renaissance in his game with a return to elite status; and this summer, he scored the biggest tournament victory of his career by winning the Sparkassen Chess Meeting in Dortmund, Germany, ahead of a field that included Vladimir Kramnik, the former world champion and world No. 3, and Fabiano Caruana of Italy, who is ranked fifth.

Luke McShane, 29, and Matthew Sadler, 39, both follow in that quaint English tradition — much like C.H.O’D Alexander and Jonathan Penrose, who shocked top Soviet stars such as Botvinnik, Bronstein and Tal — by being regarded as the world’s top two amateur players, as they hold down very demanding full-time professional jobs. McShane works in finance in the City, and Sadler in IT in The Netherlands – but while chess is now a “hobby” for both, the English No’s. 2 and 4 respectively still play to a very high standard.

Globe-trotting Nigel Short continues to add further successes to his long list of tournament victories, with this summer seeing the English No.3 share first prize in the Sigeman Invitational in Malmo, Sweden, and first on tiebreak in the Canadian Open Championship in Ottawa; and, on both occasions, ahead of talented younger rising stars.

Short, 48, consistently performs at or close to the elite GM 2700 rating level, as he fights off younger rivals by using his wealth of experience from a glittering career whose peaks include victory at the VAS Amsterdam tournament in 1991, ahead of Garry Kasparov and Anatoly Karpov, a Candidates match victory over Karpov in 1992 and a world title challenge in 1993 to Kasparov. Short is also in demand as an online commentator for some of the world’s top tournaments — but we are always glad to see him play!

David Howell, 22, and Gawain Jones, 25, are, respectively, the English No. 5 and 6, and also the last two winners of the British Championship titles – Howell storming to victory this summer in Torquay, for his second title (which he dedicated to his late father), and Jones, winning last year in North Shields. Both represented England at the very top at junior level, and have now become a regular fixture for their country at Olympiads and European Team Championships.

Adams, McShane, Short, Sadler, Howell and Jones will be cheered on by the patriotic home crowd expected to fill the Kensington Olympia, as they go into battle in the 5th London Chess Classic with the tough elite opposition of World Champion Vishy Anand, World Cup winner Kramnik, Fabiano Caruana, Hikaru Nakamura, Boris Gelfand, Peter Svidler and Judit Polgar. The composition of the remainder of the 16-player field will be announced next week. 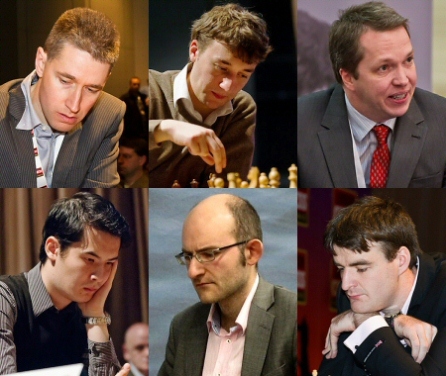