official statement by the organizers

The organizing committee of the World Championship match between Anand and Topalov officially issued a statement regarding the situation that arose in the previous days (scroll down for timeline). The news was reported live from Chessdom.com correspondents in Sofia. 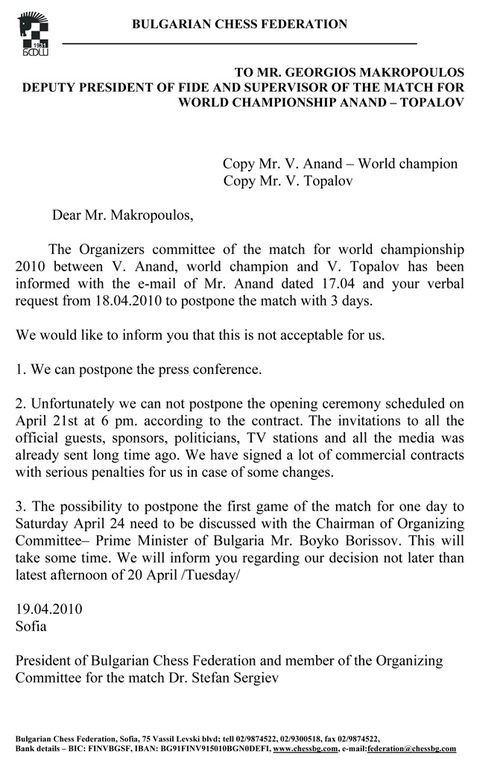 The Organizers committee of the match for world championship 2010 between V. Anand, world champion and V. Topalov has been informed with the e-mail of Mr. Anand dated 17.04 and your verbal request from 18.04.2010 to postpone the match with 3 days.

We would like to inform you that this is not acceptable for us.

1. We can postpone the press conference.

2. Unfortunately we can not postpone the opening ceremony scheduled on April 21st at 6 pm. according to the contract. The invitations to all the official guests, sponsors, politicians, TV stations and all the media was already sent long time ago. We have signed a lot of commercial contracts with serious penalties for us in case of some changes.

3. The possibility to postpone the first game of the match for one day to Saturday April 24 need to be discussed with the Chairman of Organizing Committee– Prime Minister of Bulgaria Mr. Boyko Borissov. This will take some time. We will inform you regarding our decision not later than latest afternoon of 20 April /Tuesday/

Signed: President of Bulgarian Chess Federation and member of the Organizing Committee for the match Dr. Stefan Sergiev

End of official text. Note: statement published without changes. Here is a timeline of the events which led to tension in the afternoon of April 18th.

Stay tuned for updates with Chessdom.com! Expect interviews with the organizing committee members at 15:00 CET.

On the 14th of April it was confirmed that Anand should arrive in Sofia by the 16th of April, all according to regulations and contract. However, whe Chessdom.com journalists asked the organizers if they knew the exact arrival time and date of Anand, they received negative answer. The OC had no letter of confirmation or call from Anand and practically zero communication from his team.

The playing hall was shown to the journalists photos here. Still no communication with Anand’s team was received.

The organizers of the World Chess Championship held the first press conference, where the Minister of Sports Svilen Neikov confirmed Anand’s team has taken all the rooms in Hilton Hotel, thus Anand is already in Sofia (video here). The organizers were still disappointed there was no communication with Anand, but respected their wish and asked journalists not to bother him at the hotel.

At the same time Chessdom.com issued first warning to the chess fans coming to the World Chess Championship.

Topalov was actively giving interviews for media, the count of them reached over 20 for the day. You can read translations of the most interesting here. At the same time organizers again confirmed that Anand’s rooms are being in use, but there was no contact with him.

At 12:00 CET the AICF contacted the Chessdom headquarters, transferring Anand’s wish to postpone the match (full story, statement, and letter here). The organizers were very surprised from the development and disappointed Anand has not contacted them earlier (statement of Sergiev at the end of this article)

April 18th, 18:30 CET: The latest news regarding the situation around the World Chess Championship is that Viswanathan Anand is traveling to Sofia. The organizing committee issued several staments and opinions earlier this afternoon, and after meeting with FIDE they announced, “Our latest information is that Anand is traveling to Sofia. We will have official statement later tonight or tomorrow.” No more information was shared, nor what type of vehicle Anand is using to get to the venue.

A parallel report from Indian media DNA stated that Anand is looking for ways to travel to Bulgaria for the World Championship.