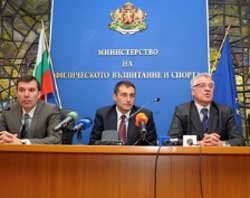 Sports minister Svilen Neikov and the organizing committee of the Topalov – Anand 2010 held a press conference today at 11:00 local time. They confirmed that everything is ready for the match, including the playing hall, the special curtain, the hotels and facilities, and the opening ceremony program.

Stefan Sergiev, President of BCF, said, “Thanks to Prime Minister Boiko Borisov, who did everything possible to assure the financial side of the match, the preparation of the Military Club, and with the assistance of Mr. Svilen Neikov, we are ready for the prestigious World Chess Championship event.”

Svilen Neikov, who is also deputy chief of the organizing committee, added, “We are happy to host such a large and prestigious event in Bulgaria. We are the hosts and that surely works for the positive image of the country. We are ready for the WCC according to all FIDE regulations.”

At the press conference the arrival of Anand in Sofia was confirmed. The manager of Topalov, Silvio Danailov, also stated that the challenger with his team has now returned from the training camp in Sandaski and is in Grand Hotel Sofia.

Danailov, Neikov, and Sergiev at the press conference