Latest details and reactions and LIVE from Sofia, organizers claim Anand team is in the city

A few days ago at a press conference the Sports Minister Svilen Neikov and the organizers of the match Anand – Topalov confirmed that “Viswanathan Anand is already in Sofia for the World Chess Championship match and all rooms of Anand’s team are already inhabited. “.

However, events took an unexpected turn. On Sunday at 12:00 CET All India Chess Federation sent a statement to the Chessdom headquarters, regarding a scenario we warned about:

Latest updates: Scroll down to the bottom of the page for the latest reactions. FIDE meeting starts in a few minutes, at the same time Sofia and Plovdiv airports were opened.

Update: Video from the first press conference (two days ago) where the Minister of Sports announced Anand and his team is in Sofia here

The All India Chess Federation has sent an urgent message to FIDE seeking postponement of the Anand versus Topalov World Chess Championship match which is scheduled to start from April 23, 2010 in Sofia.

The AICF Honorary Secretary D.V. Sundar has sent an urgent message requesting the FIDE President Kirsan Ilyumzhinov to intervene and postpone the World Title match to allow time for the defending champion Viswanathan Anand to reach the venue.

Anand is unable to fly to Sofia as flights in Europe are cancelled. The ash from the volcanic activity in Iceland has stranded passengers all across Europe and Anand is stranded in Frankfurt.

The AICF letter requests the intervention of FIDE President and requests the match be put off by atleast three days.

Anand was scheduled to reach on April 16 but has not been able to fly due to closure of the airport in Germany. He needs time to make alternate booking and the AICF has officially asked for a postponement of the match. 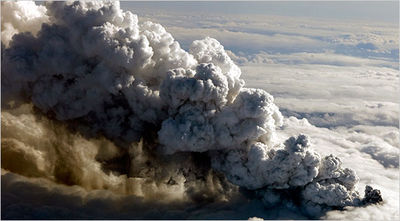 The AICF also forwarded as statement of Viswanathan Anand:

In view of the extreme force majeure situation we are facing, it has become difficult and near impossible to travel in Europe. We are working with the FIDE supervisor to see how we can travel at the earliest. Given these circumstances it has been agreed, keeping in mind Vishy’s arrival in Sofia the schedule could be moved accordingly. We wouldnt want to speculate on rumours at this point and will try and arrive at the earliest”, said Aruna Anand, wife and manager of the world champion Viswanathan Anand.

To: All the concerned parties

We were due to arrive at _13.05 on 16th April by Lufthansa LH 3484 from Frankfurt to Sofia. We were in transit from Madrid. Unfortunately from 16th April all flights have been cancelled as is the case in most European countries due to the volcanic eruption. Therefore due to circumstances beyond our control we are unable to reach Sofia as scheduled on 16th April, 2010.

We are in close consultations with Lufthansa and if the airspace in Germany does open we will fly to Sofia.

Meanwhile have been checking on alternatives of going to airports that are reachable by train. However, trains are overbooked and further the Airports seem to be shutting down. Rebooking on flights seem very difficult and we have used considerable influence in getting ourselves rebooked at the earliest.

This letter may be treated as notice under clause 11(2) of the Agreement of intimation of Force Majeure condition. I will immediately intimate you on finalizing an alternate arrangement to reach Sofia.

Reaction by the organizers of the World Chess Championship

Chessdom.com journalists in Sofia immediatelly got in touch with the organizers, which were also surprised by the letter. They commented, “We have information from Hilton Hotel that Hans-Walter Schmitt has the keys from all room and that all rooms are actually being used. AICF themselves do not play a role in this championship and we have to consult FIDE immediatelly”.

Update: Stefan Sergiev, President of the BCF, cited by BGNES, said for media in Sofia, “We believe Anand’s team is here. If Anand had called or warned about the possibility, or at least for the time of his arrival, earlier, we would have made everything possible to arrange alternative transportation to Sofia. I have a feeling the Schmitt coming earlier and checking in all rooms could be a trick.” Sergiev continued, “Topalov was also in SPain on an island, but managed to come on time, Anand is looking for excuses and reasons. No World Championship has ever been postponed.”

A meeting with FIDE deputy President Georgios Makropoulos starts at 17:00 CET, stay tuned for LIVE reporting from Sofia with Chessdom.com!