Veselin Topalov only needed a draw to get clear first place at the third leg of the Grand Prix series in Zug, Switzerland. However, he showed his class and defeated Sergey Karjakin with the white pieces in the last round to increase his advantage in the standings and raise his live Elo rating to 2793. Hikaru Nakamura finished in sole second place.

Even though it seemed unlikely for Veselin Topalov to lose in the last round and give up his first place, if there was someone able to pull out a surprise, it was the strong Sergey Karjakin. The Russian showed his ambitions by opting for a Benoni structure with black. The unbalanced positions arising in these structures seemed to be more suited for the Bulgarian, but Karjakin was probably trying to recover from a rather disappointing performance in Switzerland.

Topalov used the typical plan of going for the control of the c4-square with white. Karjakin sacrificed a pawn on move 25 and committed a few inaccuracies afterwards. A big factor in this game was the clock, as Topalov had a big time advantage throughout the battle. The young Russian was not able to hold the pressure and completely went astray. He resigned right after the time control on move 41. 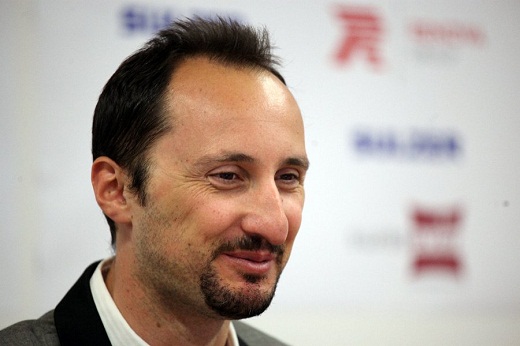 Hikaru Nakamura was the only player with a theoretical chance to catch the leader in the last sprint, but was not able to break Fabiano Caruana’s defenses in today’s game. The American finished in sole second place anyway, given that the rest of the games finished in draws as well.

Nakamura went for the Exchange variation of the Slav Defense, which probably came as a surprise for Caruana, who probably was expecting a sharper choice. The American put pressure on black’s position with pawn expansions on both flanks. However, Caruana’s position was extremely solid and he was never in real danger. The peace treaty was signed on move 58. 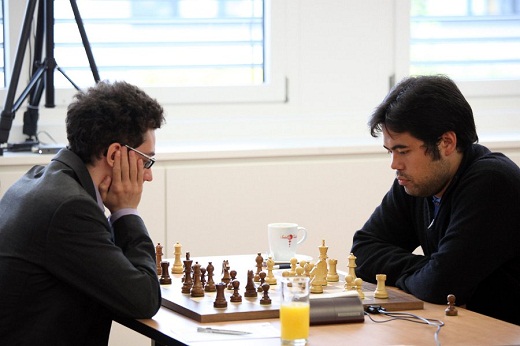 Peter Leko finished the event with yet another game where he pushes but does not get anything in the end. His rival today was Rustam Kasimdzhanov. The Uzbek showed good defensive skills to make a draw on 51 moves. The game was another Ruy Lopez – a very popular choice in this event – where white pushed and black needed to sacrifice a knight to achieve the half point.

Gata Kamsky played with white against Anish Giri. The Dutch, playing with the black pieces, looked for the initiative against Kamsky’s speculative play in the opening. On move 30, the American sacrificed a piece in exchange of a passed pawn in the a-file. Eventually, this proved to be enough compensation and the draw was signed on move 56. 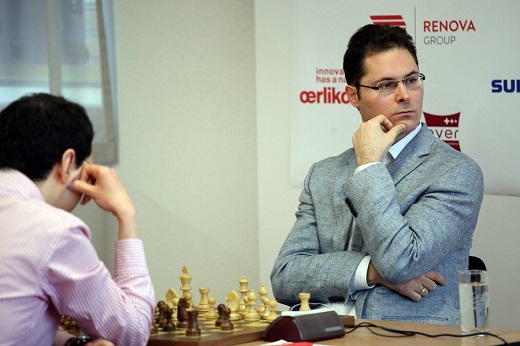 The Azerbaijani battle that faced Teimour Radjabov and Shakhriyar Mamedyarov finished peacefully after 32 moves of a Gruenfeld. Ruslan Ponomariov and Alexander Morozevich split the point in a theoretical line of the Queen’s Gambit Declined.

The fourth leg of the Grand Prix is supposed to take place in Madrid, but nothing has been confirmed yet. 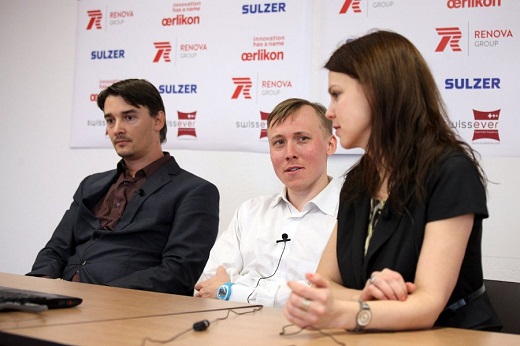 Ponomariov and Morozevich with Anastasiya Karlovich