A pair of runaway trains kept up their furious pace in round four of the 2013 U.S. Championship and U.S. Women’s Championship, held at the Chess Club and Scholastic Center of Saint Louis. Both tournament leaders, GM Gata Kamsky and IM Irina Krush, won their fourth consecutive games to maintain their respective leads.

Kamsky took black against the fearless upstart GM Conrad Holt, who kept up his usual stoicism despite his first-ever game against the three-time champion. Kamsky said after some opening troubles in his first three matches, he wanted to get back to his comfort zone. “I decided to play something I know,” Kamsky said. “In the opening white posed me no problems.”

The game swung and became more dynamic after white’s e-pawn lurched forward. “When he played e4 and I saw I could open my bishops, I thought, ‘Let’s have some fun.’” The top-rated player eventually decided upon a series of moves that actuated a landmine, but even without Holt’s complicity, a draw was attainable. “I was really liking that he took my a-pawn,” he said about Holt’s bravado. “There are some traps. I had a feeling my opponent was playing for a win. I got lucky.” Kamsky explained that white’s 31st move was not losing per se, but it forced white to find 32. Qe2 Bxg2! 33. Kxg2 Rxa6 34. Qxa6 Nf4+ 35. exf4 Qe4+. Black, who has sacrificed the majority of his army, then forces a repetition. 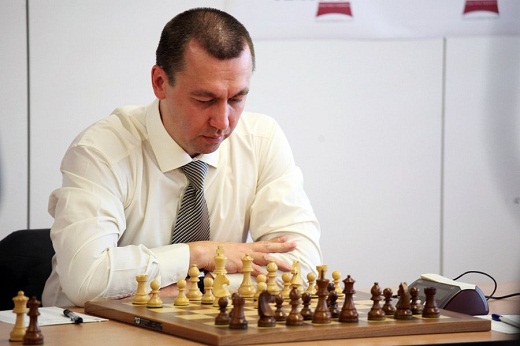 This win puts Kamsky at 4-0, and still eligible for the $64,000 “Fischer Prize” for a perfect score. He is the only player to remain unblemished for this many rounds since the prize was first introduced in 2009. For his part, Kamsky insisted the award is so far-fetched, he did not even read the amount. “I heard something about if you go 9-0, you get something super-duper? But I don’t think it’s possible this day in age. Back in Fischer’s time it was possible.”

In the women’s tournament, pre-round leader Krush kept up her own streak. She dispatched three-time champion WGM Anjelina Belakovskaia in what Krush called an “interesting, strategic game.” The finish was worthy of an endgame study – Krush transitioned her favorable rook-and-pawn ending into a pawn race. While both pawns reach the finish line, Krush gets the move, and plays the simple tactic …Qh8+ and …Qg8+, skewering black’s final two pieces. Her veteran opponent saw the idea and resigned. 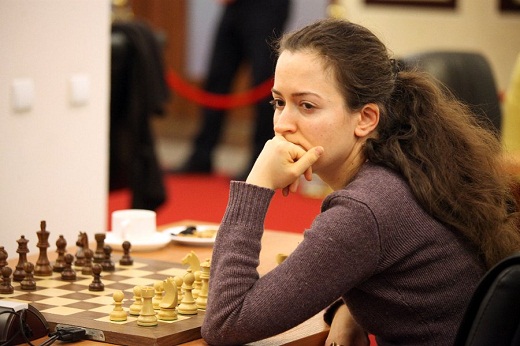 Unlike Kamsky, who increased his lead by a half-point, Krush could not pull any further away from the field thanks to WGM Tatev Abrahamyan’s continued sparkling play. She beat WIM Iryna Zenyuk in a tactical melee to move to 3.5/4. The Sicilian Dragon was all theory for about 20 moves. Abrahamyan said her preparation has been paying off in Saint Louis, but, she said, “It’s so easy to overanalyze something, hallucinate something.” The attack down the h-file was typical but brutal.

The game was the first of the day to finish in the women’s section. “Having a short game always helps you,” Abrahamyan said. “You have time to rest.” She will need it as she faces her toughest test so far in round five. Abrahamyan lines up with black against IM Anna Zatonskih. Historically, that is not such a bad offer. “I only beat her as black. I never beat her with white. The pressure is always on the higher-rated player.”

After losing a crucial game versus Krush yesterday, Zatonskih bounced back by besting WIM Viktorija Ni to get to 3/4. “It was difficult to win because she is such a solid chess player,” Zatonskih said. “Against someone who is lower-rated, you need to take some chances, and I know she is not feeling well.”

In the U.S. Championship, only FM John Bryant could have stayed within a half-point, but he never got in the game against GM Larry Christiansen. An early …Nc6 was summarily punished by the advance of white’s center pawns, and the passed d-pawn decided the game without issue. At two hours and 20 minutes, Christiansen’s win was the shortest game of the championship so far. “The game was in the bag pretty early,” he said. After the grueling defeat yesterday at the hands of Kamsky, Christiansen said today’s win was “just what the doctor ordered.” Previously he stated concern for his level of energy as the event progressed.

Christiansen’s win puts him on 3/4, but since he has already played the leader, he has to hope for a Kamsky misstep. Also tied for second standing are GMs Alex Onischuk and Joel Benjamin.

Onischuk won a wild middlegame against GM Alex Shabalov that featured seven passed pawns, the only pawns remaining on the board. Thinking it to be a notable achievement, Onischuk said it actually happened less than a month ago, to none other than Kamsky (against GM Alexander Morozevich). Like his Olympiad teammate, Onischuk scored the win, but only after a circuitous king walk that the disapproving computer alternated between winning and drawing for black. “We were both concerned,” Onischuk said, with the smile of a man who just got back from an adventure. “He played very creative. He finds so many amazing moves. Everyone knows that Shabba can only play this way, so I had expected this. When he’s in good form with the white pieces, he can just crush you.” 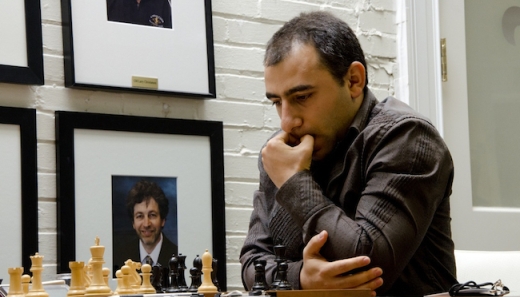 Benjamin’s win over GM Varuzhan Akobian was more restrained, and the win was a much more traditional endgame. His win nets him a date with black on the top board, as he becomes the next player to try to unseat Kamsky. Onischuk gets white against Christiansen on board two.

Neither GM Yury Shulman nor second-seeded GM Timur Gareev could muster a win, but Shulman’s method of securing a draw was visually appealing. He simply left his queen en prise, whilst simultaneously moving his knight to a square threatened by a pawn. Picturesque, yes, but not best. Instead, a simple trade of rooks and subsequent knight improvement would have given black problems. Strangely Gareev did not take the queen and repetition right away, leaving the door ajar for an even better variation for Shulman. After 26…Kh7? 27. Rxd4 cxd4 28. Ne7 Rf3 29. Kg2 would have given white a plus since 29…c5+ is met easily by 30. Ncd5. “If I had seen Kg2, I would have played it,” Shulman said. Instead, he only saw 29. Qe2, and was justifiably scared by 29…Rxf2+! “Intuition should have told me to play it.” The draw extends Shulman’s U.S. Championship unbeaten streak to 16 games, although he is not proud of the series since 15 of the games were drawn.

Also lurking are GMs Alejandro Ramirez and Sam Shankland, who both won in round four to get to 2.5/4. They will play each other in round five. Bryant and Holt get a brief respite from playing the veterans as they face each other next round.

Other interesting matchups include IM Sam Sevian against IM Kayden Troff, the two youngest players in the tournament (today was Troff’s 15th birthday and the release of a James Bond themed music video that he appears in). GM Ray Robson and Yaacov Norowitz both got their first wins today, while college students and good friends GM Robert Hess and GM Marc Arnold will play one another from the bottom of the tables.