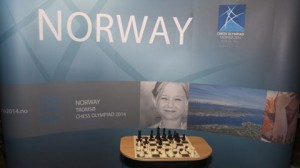 At a board meeting on Sunday the Tromsø 2014 organisers met to discuss the situation surrounding teams that missed the deadline for Olympiad registration. The Chess Olympiad Tromsø 2014 Board have now released the following letter to FIDE President Kirsan Ilyumzhinov. “COT2014 accepts that the federations that have not registered teams by the deadline of June 1, 2014, are hereby permitted to register their respective teams, as they would have been on June 1.”

See the full press release below

More on the topic:

We acknowledge the receipt of your letter stipulating a set deadline for response.

During a Board meeting yesterday evening, COT2014 discussed the recent developments and reached the following decisions:

1. During the entire planning of the event in Tromsø, COT2014 has worked on the assumption that FIDE accepted that the registration deadline for participants was June 1, 2014. As soon as COT2014 became aware that there could be various interpretations of the regulations, we sought support for our interpretation that teams that registered after this date could not participate, in a specific enquiry to FIDE Chief Inspector and Vice President Israel Gelfer, who confirmed this by e-mail on June 5, 2014.

2. COT2014 stands by its interpretation of the regulations and therefore does not agree that the FIDE president can use Section 6.1 of the Olympic Regulations.

3. However, COT2014 takes a positive attitude to the FIDE President’s request out of consideration for the players, federations and good sportsmanship. Consequently, COT2014 accepts that the federations that have not registered teams by the deadline of June 1, 2014, are hereby permitted to register their respective teams, as they would have been on June 1.

4. COT2014 will seek in negotiations with FIDE to find a solution to deal with the increased costs incurred by COT2014 as a consequence of this decision.

5. COT2014 will do its utmost to solve the logistical challenges, and will seek FIDE approval regarding the accommodation arrangements for the teams for which this decision applies.

In addition to the above five points, the Board notes with satisfaction your statement in a recent interview that the Chess Olympiad will not be moved from Tromsø. This strong statement gives you credit and COT2014 hopes for a positive and constructive dialogue with FIDE up to and during the Chess Olympiad and with no further legal threats.