The 20th International Troy Open Chess Tournament was held on 6th-10th August 2012 at the Anafartalar Sport Hall in Canakkale, Turkey.

The 9-round Swiss event was organized by the Turkish Chess Federation and arranged in three playing groups: Category A (Over 1800 ELO), Category B (Under 1800 ELO) and Category Women.

Female players were able to choose to participate in the Category A or Category B, according to elo.

The Category A had 162 participants. Four players, including three Georgians, shared the first place with 7,5 points each, but it was the Turkish Grandmaster Kivanc Haznedaroglu who was declared winner on best tie-break. Few months ago Haznedaroglu won the Alexander the Great Open in Greece. 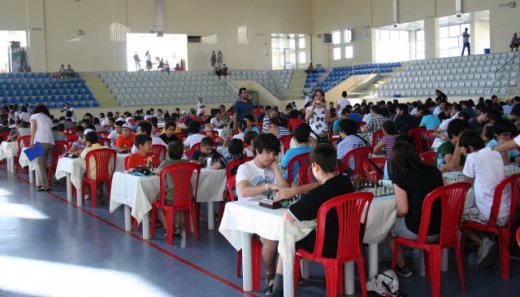 The playing hall in Canakkale

The Category B had an even better response with 274 players competing. Serkan Guder and Muhammed Taskaya (both Turkey) shared the first place with 8 points each.