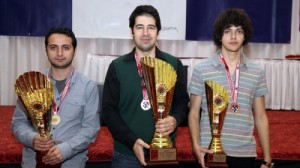 The Turkish Isbank Chess League will take place in Konya Rixos Hotel from July 10th till July 22nd, 2012. This year, near 300 players from 14 clubs are going to participate in this event.

The current champion from the 2011 Turkish Chess Championship is Isek Aquamatch. The 2012 edition of event will take place just a few weeks before the important World Chess Olympiad 2012 in Istanbul.

The Turkish league competition is not only a battle between strong players, it also gives chance to young players to grow up in direct first team league matches. Each team consists of 10 boards: the first six boards of every team are the titled players, followed by a female junior, a junior player, U15 girl, U 15 general tables.

The teams of 2012 Turkey Is Bank Chess League