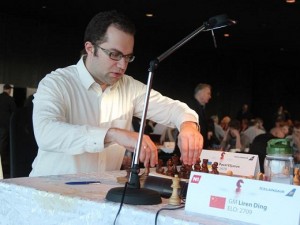 The penultimate round of the Reykjavik Open started with six players sharing the lead. The games at the first boards are already finished and the tournament now has two leaders: Pavel Eljanov and Wesley So.

Eljanov played with black against Ding Liren. The game was highly tense from the beginning because both players decided to expand on one flank over the board leaving their kings uncastled. The Ukrainian was the first one to break in the center with a knight sacrifice for two pawns. The Chinese needed to play precisely to avoid losing immediately, but was not able to do so. He resigned on move 22 when black is about to create a super strong passed pawn on the queenside.

Wesley So, on the other hand, played with white against Marcin Dziuba. The Polish GM chose the Caro-Kann Defense and So demonstrated that he was very well prepared to face this defense. The game became quite exciting when the Filipino went for a queen sacrifice in exchange of a rook and bishop. The position was very sharp and Wesley claimed a winning advantage with an exchange sacrifice and a very nice final sequence that finished with a checkmate on move 41.