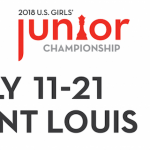 The best female U.S. junior chess players return to Saint Louis, the “nation’s Chess Capital”, this summer as the Chess Club and Scholastic Center of Saint Louis hosts the U.S. Junior Closed Championship from 12-21 July 2018. The event is the most prestigious chess tournament in the country for junior players under the age of 21. Players receive 90 minutes for 40 moves, followed by 30 minutes to the end of the game, plus a 30-second increment starting from move one. They’re competing for a prize fund of $10,300.