Untitled Pratyusha Boddha of Andhra Pradesh emerged an early leader with two points after the 2nd round of the United Bank of India 40th National Women Chess Championship, organised by Dibyendu Barua Chess Academy & All Sport Management at Spring Club, Kolkata on Tuesday.

In the 12-player round robin championship, Partyusha won the exchange of rook for bishop on move 42 against Bhakti Kulkarni of Goa, a bronze medallist in the recent Asian Indoor Games in Korea. Later, she exploited a pin on her opponent’s bishop to get the full point.

In the meeting between the two international masters of the tournament, Tania Sachdev of Air India missed some winning chances against former national champion, Kolkata based Nisha Mohota with the black pieces in a Catalan opening. After exchanging the queens, Tania grabbed a pawn on 51st move and had a better position, but she let Nisha off the hook on the opposite wing and was forced to agree to a draw in 62 moves. 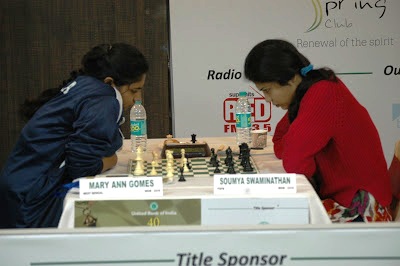 Defending Champion Mary Ann Gomes of West Bengal drew her second game on the trot, as her opponent, former world junior champion Soumya Swaminathan failed to capitalise Mary’s slightly inferior position in the opening. Though Gomes had an active knight in the ending, against dormant bishop od Soumya, her attempts to squeeze out a win failed.

In the combat between two women from LIC, WGM Swathi Ghate built up an excellent attack against WGM Kiran Monisha Mohanty. She sacrificed her light-coloured bishop to obtain a good position but faltered at the crucial moment. The win slipped from her hands allowing Mohanty to draw the game.

14-year old National Junior Champion Ivana Furtado sacrificed her knight in a complicated position on the 20th move to break open Michelle Catherina’s kingside after which she had little difficulty in wrapping up the game in 30 moves.

Chennai confirmed for World Championship Match
FIDE Presidential Board which is in progress at Baku, Azerbaijan, today confirmed Chennai as the venue for the World Chess Championship match between defending ...

ACP Women Cup starting in Tbilisi
The ACP Women Cup is taking place from February 17th-21st, 2012 in Tbilisi, Georgia. Round robin tournament with twelve participants will be played with ...